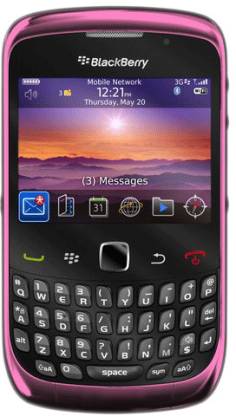 If you are someone who prefers a smartphone with keypad then the Blackberry Curve 9300 is the phone for you. Along with great features and facilities the 9300 gives you the convenience of a QWERTY keypad. Navigation on the 9300 Curve is simplified with the optical trackpad that allows you to scroll in all directions. The 9300 runs on the Blackberry 5 operating system that gives you easy interaction with your phone. The phone comes with 256 MB RAM and supports both the 2G and 3G networks for better connectivity wherever you are.

The 9300’s 2.46-inch TFT LCD screen supports QVGA, 320 x 240 pixel resolution with 65 K colours. The light sensitive screen automatically adjusts lighting levels of the screen to ensure that you can view the screen in all lighting conditions.

To capture those memorable moments the Blackberry Curve 9300 comes with a 2 megapixel camera with fixed focus. The phone also comes with video recording capabilities that allow you to shoot videos in an instant.

The bar shaped Blackberry 9300 has smooth rounded corners that make the phone comfortable to carry in your palm. The 9300 comes with convenience keys for camera and volume on the right side. The phone also packs convenient media control keys on the top and has a 3.5 mm audio jack.

The 3G 9300 is equipped with GPRS, EDGE, Wi-Fi and USB tethering. The A-GPS enabled 9300 comes with Blackberry Maps that helps you stay on course; getting lost becomes a thing of the past with this handy device. The Curve 9300 has a micro USB port that allows you to connect the phone to your PC or laptop to transfer files. But to enjoy wireless transfer from other compatible devices you can use Bluetooth.

You can get the latest updates from friends and family with Facebook, Twitter and BB Messenger. You can also enjoy the convenience of Pushmail and easily send and receive Emails. The 9300 comes with the VQ Car Finder that gives you an automated means to record where you have parked your car. At the click of a button the phone maps your way back to your car.

This is an excellent Phone. The sound is very clear. Even in street chaos, one can clearly listen and speak over this phone. The Battery Back Up is good and lasts for 3 days on average use. The features are fine. You can install the Black berry software on your laptop and keep a Back up of all your necessary contacts/Photos/Files/Documents etc.
This is a very Hardy set and is bound to last a long period.
At this price, you will get the best value for your money.
READ MORE

Not value for money

the only USP for a BB was the BBM Messenger... now since there is Whatsapp, don't bother buying this piece of plastic. No significant apps, tiny screen size, a useless camera, i could go on and on about this.
On the other hand, music quality is really good. But think if you would spend 13 grand for that.
Only buy it if you want to have secure access to your emails.
My verdict: Dont waste your money on this.
READ MORE

never ever think of blackberry

friends,please never think of buying a bb phone as honestly speaking it has nothing worth of new feature in it for purchasing this piece of junk!blackberry brand owner is a fool as he dont know of new os that is android
READ MORE

I bought this phone from flipkart a month ago, i am very happy with this phone. The only negative point is its camera(2 mp) which not that good. The features I like the most are BBM(bbm pin-289AF1AA), Facebook, twitter.
READ MORE

Dont purchase this one...its not worth of money..guys dont order this product..
READ MORE

i brought this nearly 6 months ago, it has poor battery , camera is not good , and the it slows down after downloading more than 10 apps , though if you are interested in chatting and stuff , you should buy it , even the internet works slowly , the only thing good is the qwerty keypad , otherwise its just a waste of time and money. i just think the BB is over hyped .rather a nokia would suffice
READ MORE

1
0
Permalink
Report Abuse
+
All 6 reviews
Have doubts regarding this product?
Safe and Secure Payments.Easy returns.100% Authentic products.
You might be interested in