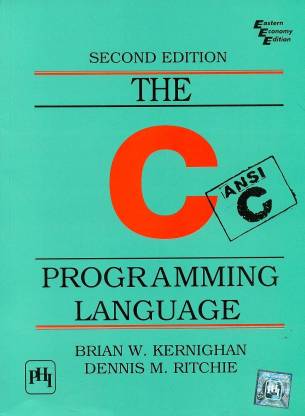 The C Programming Language is a comprehensive guide to ANSI standard C language programming, authored by the developers of C programming.

The C Programming Language is a concise and powerful guide to standard C programming written by the original authors of UNIX system and C. This book will bring readers up-to-speed with the finalized ANSI standard for C. It also teaches readers how to take advantage of distinguished C features, such as economy of expression, improved control flow, and its full set of operators and data structures. The book comprises of numerous examples which have all been tested, along with exclusive chapters on functions and program structure, external variables, scope rules, and multiple source files. This book will be very helpful for those wanting to learn the C programming language.

Brian W. Kernighan is a Canadian computer scientist who worked at Bell Labs. He completed his Bachelor's degree in Engineering Physics from the University of Toronto in 1964 and a PhD In electrical engineering from Princeton University. He is currently working as a professor in the Computer Science Department at Princeton. He is a co-creator of several programming languages, including AWK, AMPL, and a number of tools for document preparation. He has authored several books including The Elements of Programming Style, Software Tools and Software Tools in Pascal. Kernighan was elected to the National Academy of Engineering in 2002.

Dennis Ritchie was an American computer scientist best known for co-creating the C programming language. He is notable for his influence on ALTRAN, B, BCPL, C, Multics, and Unix.

AWESOME BOOK IF YOU CAN DIGEST IT!

My FIRST point: For the Indian students, it is better to start off with a C book written by a popular local author (Let Us C by Yashavant Kanetkar or Programming in ANSI C by E. Balaguruswamy or any other local C book you and your friends are comfortable with). It should be sufficient for your College exams and give you an overview of some of the commonly used features of C without right away scaring you. Only after your College grades are assured, it is alright to dive into this book. This b...
READ MORE

This book will be the best and the worst experience of your life.
You've been pampered by Java, Python, C# etc, now you'll get your butt kicked.
But it'll be so worth it, because once you emerge with your battle scars and
I've-been-to-hell-and-back look in your eye, you'll know programming like the back of your hand.

Word of warning- There'...
READ MORE

It's too precious, can't miss it!

Written by Dennis Ritchie (who originally designed and implemented the language) and Brian Kernighan, this is the original and authoritative reference to the C programming language.

The success of the C language is widely attributed to this book. Since the book first appeared in 1978, it has been the best learning resource for the C language for over two decades and it hasn't yet lost its shine.

Elegant writing style, concise, clear and informative. Though at some places the coding-style an...
READ MORE

not for absolute beginners...

this book is considered the bible of C language and for advanced C programmers and professionals is an excellent recommendation, but for absolute beginners and dummies, this book is not such a good idea.. those who are dealing with C for the first time will find it very difficult(even impossible) to understand this book... not recommended for beginners.
READ MORE

The best way to start programming

The main feature of this book is the writing style. Its extremely engrossing and easy to understand. Dennis Ritchie (RIP - he recently passed away on 13th October 2011) created the C language himself. If you're looking for a book with the latest and most complete ANSI C specification for reference purposes I suggest go instead with The Complete Reference C. This is not that kind of book. Its the type that teaches you how to program in C and at the same time be an awesome programmer.

The best book on C. Dennis Ritchie is great.

"C is a small language, and is not well served with a big book."

The book is compact, yet it is comprehensive...
READ MORE

I adore Late sir Ritchie a lot for creating a masterpiece called C Language. And this book teaches you just that! Its a great book (not for first time programmers though). But if you know what i++ means, then you must buy this! Let me tell you how good this book is: I got a great job (10+ salary) and the most important thing that helped is this book. If I ever lost this book; I would buy it for 10 times the extra cost.
Google "ansi c programming language filetype:pdf" and you will find the fi...
READ MORE

One book that shaped significantly our world

This book is precious , every line of it , it just won’t teach you how to program in C
But how to write effective and precious programs in C – for that matter any programming language
Now I don’t program in ‘C’ for living , but now and then I still refer this book.
Thanks to Dennis who given such a great programming language to us , RIP Dennis.
READ MORE

A goldmine for C

Extremely well written! Excellent examples that are oriented towards helping you learn a concept rather than just trying covering a breadth of material as in a standard reference book manner. The kind of book that should be re read and will be better understood everytime.
Fast delivery from flipkart as always.
READ MORE

A book for GREAT programmers

This book will transform you from a rookie programmer to writing elegant and efficient code. Rich in its content.It helps readers enhance and polish their programming skills. Please don't expect it to teach everything from scratch like syntax and stuff chapter by chapter like Balaguruswamy.... If you have a good amount of programming experience in C, this book will take you to the next level...If you are an absolute beginner start programming and solving problems in C using other sources. Aft...
READ MORE

0
0
Permalink
Report Abuse
+
All 149 reviews
Have doubts regarding this product?
Safe and Secure Payments.Easy returns.100% Authentic products.
You might be interested in

Language And Linguistic Books
Min. 20% Off
Shop Now
Back to top