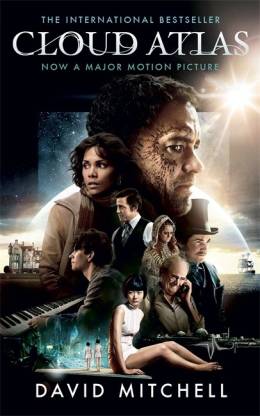 Cloud Atlas is a string of six narratives that starts in the 19th century, and chronically moves into the future. The last story follows the path back, and the novel ends where it initially started. An award winning book, Cloud Atlas is brilliantly written.

Cloud Atlas, published in 2004, consists of six stories, with six different narratives. Beginning from 1850, each story takes time forward and into a post-apocalyptic future. At the end of each tale, readers learn that the main character from the upcoming tale had been reading or observing the previous work. The first five stories are incomplete. The last one goes back into the past, and the book ends in 1850, a time from where Cloud Atlas had initially started, thus completing the other five tales.

The first story The Pacific Journal of Adam Ewing (Part 1) begins in a remote Pacific Ocean Island, and revolves around Adam Ewing. The second is set in Zedelghem, Belgium in the year 1931. Titled Letters from Zedelghem (Part 1), this tale is about a poor British bisexual musician named Robert Frobisher who writes letters to his old lover Rufus Sixsmith, a resident of Cambridge. Half-Lives: The First Luisa Rey Mystery (Part 1) is the third in the series, and its protagonist is a young journalist named Luisa Rey. This story, set in 1971, has been written like a thriller novel, and shows how Rey investigates a nuclear power plant which may be unsafe. She meets Rufus Sixsmith, who decides to help her out. The next story is about a 65 year old man who gets stuck in a nursing home. The Ghastly Ordeal of Timothy Cavendish Part 1 has a comical feel to it, and shows the adventures of the protagonist. An Orison of Sonmi~451 (Part 1) is the fifth story, and is set in the future. Sonmi~451 is a genetically engineered fabricant, and is a slave in a totalitarian state set in Nea So Copros, Korea. Sloosha's Crossin' an' Ev'rythin' After is the last story of Cloud Atlas. Readers will realize that all the previous ones are interlinked, with their central point being the sixth narrative. Part II of each story lies in Sloosha's Crossin' an' Ev'rythin' After, and readers are taken back to the first story.

Cloud Atlas is packed with drama, humour, fantasy, and thrills. This is a powerful book, and takes a deep look into the nature of mankind. It has won the British Book Awards Literary Fiction Award, and the Richard & Judy Book of the Year award. Cloud Atlas was shortlisted listed of the Booker Prize, Arthur C. Clarke Award, and the Nebula Award in 2004.

David Mitchell, born in 1969, is an English novelist. He graduated with an an M.A. in Comparative Literature from the University of Kent.

His first novel, Ghostwritten, was published in 1999. His other works include number9dream, Black Swan Green, and The Thousand Autumns of Jacob de Zoet. Mitchell was selected to be amongst the 100 Most Influential People in The World by TIME magazine in 2003. In the same year, he became one of Granta's Best of Young British Novelists. The author currently lives with his family in Ireland.

I have just finished reading it and I must say it is one of the best books I have read uptill now. The way all 6 stories are linked up asks the reader to salute David Mitchelle story telling. To the reader the first 6-7 pages may look hard but then the grip the book picks is something
to be watched for. The most interesting part is the way different language representations of English are being used to tell 6 different stories which range in different time zones. Also now the movie being rel...
READ MORE

I finished reading Cloud Atlas a few days ago and I have to say it is quite brilliant. The way the book is structured and the way the 6 stories link together is just amazing. I have never read a book like this and may not do so again. The characters are all so endearing and you can easily find yourself taking sides one way or another. I would highly recommend this book.
READ MORE

This is the first book from David Mitchell that came my way. It was a tough read the first few pages - in fact - the entire first half. As you go on from one story to another. Each story moves into another one very abruptly.

But the second half sets things right - the six stories converge and it all begins to make sense. And that is when you realize the phenomenal story telling capability of David Mitchell.

I would recommend this book highly. There is a little bit of philosophy and a messag...
READ MORE

Seems a nice one

Haven;t read it completely but to understand it, you neeed to have a dictionary as you read it
nice language, a nice book,
well printed, noce paper , nicer outer cover and a wonderful story based on the movie i saw in theater,
Verry nice , worth the reading time
READ MORE

0
0
Permalink
Report Abuse
4
6 different though slightly inter-linked stories, spanning from the 1800's to a post-apocalyptic future, together displaying an underlying common theme of human nature. The first chapter may be hard for some readers but the whole book is rather eloquently written & will keep you hooked! A great buy for someone who wants to try out a new reading experience.
READ MORE

This is not an easy book to read. Six stories, all intricately interrelated. Some stories really interesting, some not so much. This book shatters the boundaries of genre and time. Give it a try if you are looking for something groundbreaking. It is worth your time.
READ MORE

A different sort of novel.

The book's narration is in different way than the conventional narrative structure. It is spread over period of time across characters. It is not exactly my favorite kind of novel but it is queer. Although, everybody has different perceptions so a reader can judge if its good or bad for himself.
READ MORE