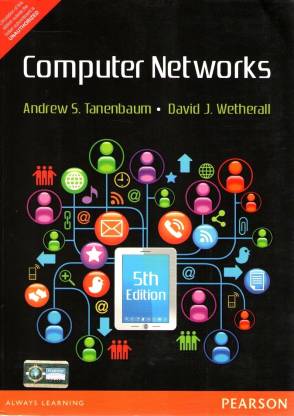 Sold Out
This item is currently out of stock
Author
Tanenbaum Andrew S.
Read More
Highlights

Published in the year 2012, Computer Networks is a book that serves as an introductory guide that covers the basic aspects of networking.

A computer network is a network where computers exchange data. A computer network can be created either by wireless media or through cables.This fifth edition of Computer Networks is set to equip the readers with the fundamental aspects in the field of networking. It places a great deal of emphasis on certain technologies used in networking, which include Bluetooth, 3G Cellular, linked with fixed-network coverage of ADSL, MLPS, peer-to-peer networks, gigabit Ethernet, and internet over cable.

In total, there are 8 chapters in this book, and they include The Application Layer, The Transport Layer, The Physical Layer, The Data Link Layer, The Medium Access Control Sublayer, and The Network Security. Tanenbaum style of structured teaching helps the readers to grasp concepts easily. He begins by explaining the physical layer of computer hardware, networking, and transmission systems, after which he tackles advanced concepts pertaining to network applications.

This latest edition also provides detailed information on content distribution, quality of service, multicasting, internet routing, and congestion control. He also throws light on RFID networks, 3G networks that are increasingly being utilized by smartphones, and real-time media. This fifth edition of Computer Networks is highly recommended for those who want to stay updated on the latest trends in the field of networking.

Andrew S. Tanenbaum is an author, lecturer, and computer scientist.

Tanenbaum was born on 16th March, 1944, in New York City, United States. He completed his undergraduate degree from MIT in Physics, and went on to obtain his doctoral degree from the University of California, Berkeley, in Physics. He currently serves as a Professor at the Vrije Universiteit, Amsterdam, where he teaches Computer Science. He is also a fellow of the ACM, and IEEE. He has worked for Electoral-Vote.com, which is dedicated towards analyzing poll data of federal elections in the US. Tanenbaum has also been presented with several awards, and has received an honorary doctorate from Petru Maior University. He is also the founder of MINIX, which is an open-source operating system that resembles UNIX.

David Wetherall is an author and educator.

Does this book really need a review?

To cut a long review short: Must have for anyone connected to computers and/or networking.

Tanenbaum is among better acknowledged people in the computer industry. He is also the founding designer of MINIX OS. As a writer, he has written books worthy of every praise they have received.

This is a good book for anyone venturing into computer networks for the first time. Note that this book limits the discussions on the hardware side of the technology. Rather, large portions of the book are de...
READ MORE

This book is really awesome as all the networking concepts are explained in detail and in simple language. Make sure to take notes while reading this book; it will be really useful for college and competitive exams and not to forget, interviews.
READ MORE

I brought this when i had 3 months to prepare for GATE exams, you can cover a lot of ground if you give a decent amount of time per topic, say about 15 mins to a page and 1 hr for a topic. Once done you would be able to gain much need competence to solve questions.

This is one of the lovely technical books out there, if you love to soak in nuances of networks buy this one.
READ MORE

Quite good book if you want to go deep
READ MORE

There is a huge disappointment with the index of the book, less information about the contents. You will need to read the whole book to know which topics are in which chapters. Also the appendix doesnt help. Overall its good for students to learn more!
READ MORE