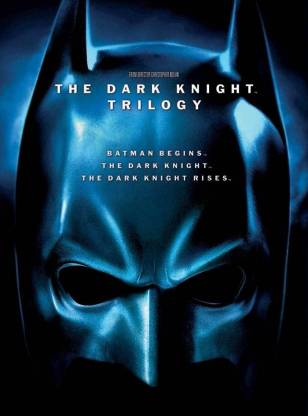 Sold Out
This item is currently out of stock
Highlights

At night there is no one to keep you safe from the sinistrous things that come to ravage you but the Caped Crusader, the Batman. Directed by Christopher Nolan, The Dark Knight Trilogy is a bafflingly well-shot series of awe-inspiring films that started with Batman Begins in 2005. Starring Christian Bale as the Batman, Batman Begins tells the story that led to the creation of the Batman, about how Bruce Wayne takes up the role of the guardian of the night and the protector of the innocent. The second installment of this series, The Dark Knight, sees Batman endure and battle a stark raving mad villain called the Joker who wishes to simply see the world burn. The finale of the epic film series, The Dark Knight Rises, witnesses the return of the Batman to confront a twistedly disciplined criminal named Bane, in the process he also has to confront his fears and rise above all the tragedy of his past and present to uncover the uncertain future.

A Must Have for Die Hard Batman Fans

The whole trilogy reaches you in a mere 3-4 days in a nicely packed box. The Dark Knight Trilogy along with the special features DVD is a good collector's item for fans who like to refresh the memories once in a while. A must have I say.
READ MORE

if you devote yourself to an ideal, and if they can't stop you, then you become something else entirely.

You get a 64 Page excerpted (i.e. shortened) version of the wonderful book: "The Art and Making of The Dark Knight Trilogy" mainly containing pictures on sets and beautiful concept arts of trilogy.

That is tremendous bang for your buck! Not only with the movies, but there are hours and hours ...
READ MORE

One of the Best Movie Trilogy to be Made...

Box Contents of the DVD Version :-

The Trilogy You Must Own

I personally think this trilogy is the trilogy where next part is better than previous one.
All three parts are mind blowing.
And Nothing To Say about FLIPKART,Its the best online Shop Of India.
READ MORE

Placed the order yesterday, and delivered today. Brilliant. However, I dont have words to describe how low I feel today. Received my Trilogy boxset today. Contrary to what the product page says, I only got the DVD's and not the 64 page booklet. Am seriously disappointed. Was so excited about receiving one of the best trilogies of all time as a collectors item. But not to be. I am sure watching the films will be an outstanding experience though. Flipkart, please rectify the product page.
READ MORE