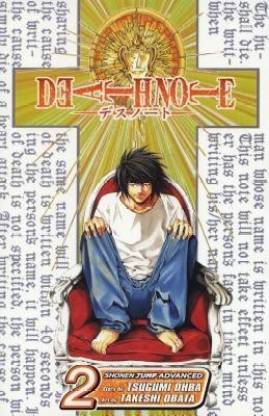 Get notified when this item comes back in stock.
Home
Books
Graphic Novels and Comics
Manga

Yagami Light’s one man assault against wrong-doers with the power of his Death Note continues in volume 2 of the bestselling shonen manga written by Tsugumi Ohba and illustrated by Takeshi Obata.

Yagami Light believes he now controls everything. Indeed, vested with the powers of the Death Note, through which he can kill anyone by writing their name in it, he is pretty unstoppable. All he needs is a person’s name and a memory of what they look like. He gains notoriety as “Kira”, and the FBI begins a manhunt for him. He uses the Death Note to take care of the agents looking for him. He doesn’t realize that this is a mistake. The famous reclusive detective L has emerged to work with the task force in charge of finding “Kira”. No one knows L’s real name, and to add to Light’s chagrin, his father heads the task force looking for him.

Tsugumi Ohba is the pseudonym of a Japanese writer. He is best known for Bakuman and the current title.

Takeshi Obata is a Japanese manga artist. He is well-known as the artist of Hikaru No Go.

The adventure continues in the second volume. It gets more exiting with each chapter. Light Yagami becomes more daring with each killing and with the authorities hot on his heels, he has to keep a vigilent eye. A must buy.
READ MORE

0
0
Permalink
Report Abuse
+
All 6 reviews
Questions and Answers
Q:Is volume 2 is continued part of volume 1
A:yes it is.
Anonymous
Certified Buyer
1
0
Report Abuse
Didn't get the right answer you were looking for
Safe and Secure Payments.Easy returns.100% Authentic products.
You might be interested in

PS3 Physical Games
Min. 20% Off
Shop Now
Back to top