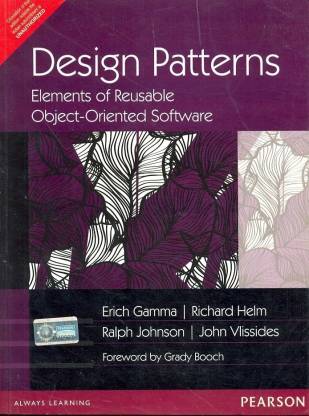 Four brilliant designers have written this guide, which can be used for solving design problems related to object-oriented software. Developers, architects, and object oriented designers can find the book useful. Design Patterns: Elements Of Reusable Object-Oriented Software also aims to help programmers who are looking forward to upgrade the quality of their designs.

Whether an individual is an object oriented designer, an architect, a developer or a simple programmer, there are a few design problems that are universal, and for anyone serious about their work, such hindrances can be quite a downer.


Design Patterns: Elements Of Reusable Object-Oriented Software is a guide that teaches readers how to make use of standard design patterns for finding effective solutions to design problems encountered on a daily basis.


The book contains around 23 patterns, all explained methodically and in detail, to create designs, which are not only reusable but also quite flexible. Also, these improved designs do not require the author to go back to the design solution each time.

From this book, the readers can understand how these patterns contribute to the development of software patterns and how they can be used to solve any design problems that may occur.

Every pattern description comes with an explanation that details when certain patterns can be used, how they work with larger design, and when the other patterns appear limited. All patterns come with codes so that they may be applied to object-oriented programming languages and they are based on tried and tested examples and are set up using real systems.

Published on November 10, 1994, this book has sold exceptionally and is considered a milestone text in object-oriented design. The authors have attempted to provide timeless and highly effective solutions in the book.

John Vlissides studied electrical engineering at Stanford and was a renowned software scientist. He worked at Stanford as researcher, consultant, etc. and later at IBM T.J. Watson Research Center in New York. He died of a brain tumour at the age of 44.


Erich Gamma is a Swiss computer scientist who is part of Microsoft Visual Studio since 2011. He pursued his PhD in computer science from the University of Zurich.


Ralph Johnson works at the University of Illinois as an associate professor of research in the department of computer science.


Richard Helm has a PhD degree from the University of Melbourne, Australia, in computer science. He worked at IBM in the software technology department and then for DMR group as a technology consultant, after which he rejoined IBM.


Design Patterns: Elements Of Reusable Object-Oriented Software is comprehensive, well packed with real-life examples and effective solutions for design-related problems. Every single aspect of the patterns as well as their implementation is explained in great detail.


Collectively, these four academics and scientists are referred to as the gang of four.

Best book ever on the subject - and written by the creators!

The subject of design patterns is quite old (formalised in the mid nineties). There are dozens of books and tutorials on the subject - a few of them quite bulky too. Millions of designers and developers use DP everyday but few understand their true application and optimum usage. And, fewer people can explain the subject in a concise yet usable manner.

This book is the one that says the least about patterns and opens up all about patterns. It is surprisingly detailed and, at the same time, co...
READ MORE

Indespensible knowledge bank -> must have for all s/w developers

Very prompt delivery by flipkart. Got it in 1.5 days. Keep up the good work on other inventories also.
About the book, the best book on patterns that I have ever read. It has good explanations on all patterns.
If you are working in Software Industry as a developer, you might need this to simplify bigger problems and write production quality code. A must have!!
READ MORE

A must read for people in system design

This is an authoritative book on software design patterns. It's important for every software developer interested in writing better applications. These days most software professionals are busy using 'frameworks' to get their daily work done. Most of these frameworks use a lot of design patterns to solve common problems. The book is filled with practical examples and is definitely one of the better investments that you'd make.
READ MORE

In depth knowledge of design patterns

It is a great book to get complete idea and implementation details of design patterns. All design patterns are explained very well and specially their comparison at the end. One thing I didn't like is that examples they have given are in smalltalk may be they could have given it in C# or JAVA
READ MORE

this is best book the people who r intrested in computer programing, and are starting as a new user. this books really is a great advantage for the new comer in this feild. now its up to you what u wanna do with this oppurtunity to purchase this book at such a low cost,,,,,,,
but as far as y review is coserned i will advise to u purchase book with no restrains iin the mind
READ MORE

This book is one of the best books to read. If you are OOP developer you must go through this book.

The courier was well packed. Good Experience with the Flipkart. I am going to shop more on flipkart.
READ MORE

Must Have in Your Rack

The GOF is a very well written book on Design Patterns with examples in C++.
It not only explains the need and use of individual patterns but also gives insight on other aspects like usage, limitation, comparison...
READ MORE

The book describes design patterns using real life examples, which makes comprehension easy. Although its a low priced edition with low quality of printing, but its content quality makes up for the lack of print quality. Must buy for a c++ developer.
READ MORE

Very good book to get your head around design patterns

This book is very good to understand design patterns. As the book goes on, it loosely lays out the design for a complex software, chapter by chapter as it nears completion. Different components of the software is constructed (planned out) using different patterns, so the user can get an idea straight away regarding implementation of the said pattern, its pros and cons.

In my opinion, this book is best read in a hyper-linked fashion, by reading up the chapters on the particular pattern as it ...
READ MORE