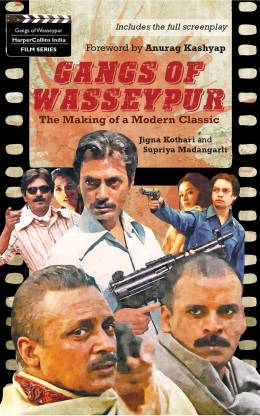 In Gangs of Wasseypur: The Making of a Modern Classic, the authors describe the making of the movie in details. They go behind the scenes to bring to life the difficulties, trials, success and joy associated with the making of the movie. The book is nothing but a testimony to the spirit of everyone associated with the film and a tribute to one of the most honest directors of our times- Anurag Kashyap

Gangs Of Wasseypur: The Making Of A Modern Classic by Jigna Kothari and Supriya Madangarli makes an interesting read. The book comprises screenplay of both the parts of the movie. The book describes director Anurag Kashyap in action on the sets of this dark comic tale of gangsters and their various eccentricities and mannerisms. The book very well describes all the different aspects and elements of the film and introduces the people associated with the film.

Anurag Kashyap is a prolific Indian screenwriter, director, and producer. His directorial debut was Paanch, but he was critically acclaimed and known for his movie, Black Friday. He has also directed movies like No smoking, Dev D, Gulaal, and the The Girl in Yellow Boots. He has been honored with Filmfare awards for his outstanding work as a director and screenwriter.

The book gives a 360 perspective of how an idea for a movie rises from personal experiences and references of people from the locality. With a narrative encompassing the journey of the screenplay to the final output is intriguing, what is amazing is how the entire team was formed, their perspectives and the overall experience.

A part of the book is the screenplay of GOW- just a reference to how much of the movie is detailed on the spot just before the shoot.

The book is mainly about the making of the film, which at times feels like an extension of the Making video which comes along with the DVD. However, it gives a solid insight into Anurag's style of direction and the amount of effort the entire team had to put for establishing the solid backbone for the environment of the film. Most definitely a collector's item and something bonus for die-hard Gangs of Wasseypur fans like me, who simply cannot get enough of the DVD, articles and the Making Vid...
READ MORE

This book is actually collection of Screenplay and the events built in making GOW. This is entirely for Fans of wasseypur and Anurag kashyap. Buy only if you loved Gangs of Wasseypur. For me this movie is indeed a modern classic and achieved a cult status.
READ MORE

A significant addition in the genre of film studies. Undoubtedly, the film can be compared to the " The Godfather" type of movies. The tagline" gangstar movies" , i think, is not appropriate to comprehend the film in its totality. And the book is necessary to understand the movie. However, this book doesn't include the detailed description of the songs. This movie without ' womaniya'... just unthinkable....
READ MORE

Doesn't do complete justice to the classic

The authors are like historians, they weren't there ! so they talked to the ones who were there. So that's pretty much about it.. except the interviews with the director and actors, there's nothing much in the book. The experience is borrowed and the writing ordinary. I wish anurag did this himself.
READ MORE

this book is very good

this book is very good and it is based on the real story of dhanbad Nothing is worse than inaccurate information. If you're not really sure, research always helps.

Stay concise
Be creative but also remember to stay on topic. A catchy title will always get attention!