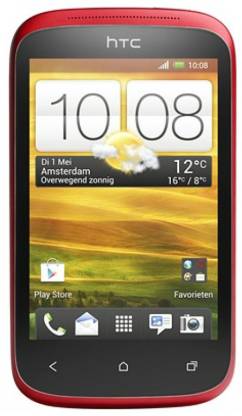 An output of the HTC Desire Series, the HTC Desire C is an engaging phone packed with a number of useful features. Like the HTC Desire phones preceding it, the Desire C comes in a candy bar form and is run on the intelligent Android v4.0 (Ice Cream Sandwich). The Android operating software is backed up by a 600 MHz Scorpion processor and an adequate 512 MB of RAM to ensure that apps on the mobile are run in an efficient manner.

The device has an attractive 3.5-inch Capacitive Touchscreen display which provides an HVGA resolution of 480 x 320 pixels. The interface on the device is the HTC Sense 4.0 which is capable of enhancing as well as simplifying usability of this HTC mobile.
The HTC Desire C comes packed with a powerful 5 megapixel camera which doubles up to record video as well. The camera features tools such as Auto Focus and Geo–tagging which make it simple and quite user friendly.

The phone is aesthetically attractive to look at and possesses straight edges meeting up at well-rounded curves. The thickness of the device is 11.95 mm and it weighs in at a slight 98 g which makes it easy to hold in the palm of the hand. The Proximity sensor on the device switches off the display when the user takes a call while the Ambient Light sensor adjusts the brightness of the screen depending on the intensity of light in which it is held. Both these sensors enhance the usability of the phone while also serving to preserve battery power.

The HTC Desire C contains an internal memory of 4 GB. This memory can be increased with a micro SD card by up to 32 GB which can store the user’s music collection and videos as well. The phone is powered by a 1230 mAh battery which provides for optimum battery life.

This HTC device is capable of connecting to the internet through the multiple connectivity features it possesses. The phone incorporates GPRS and EDGE technology to stay connected on the 2G network. For an enhanced browsing experience the device is capable of connecting to the 3G network as well. Additionally, the HTC Desire C is also WiFi enabled so that the user may connect to a wireless network in their vicinity and can be tethered to another device using the WiFi hotspot function. Data can also be exchanged via the Bluetooth function on the phone or the micro USB port on the device. The assisted-GPS feature on the HTC Desire C serves as a navigation aid in the form of Google Maps.

The entertainment features of this phone include a music player and a video player. The HTC Desire C also comes with inbuilt Beats Audio technology to enhance the clarity of music that is played from the device. Useful apps such as Gmail, Youtube, Google Search and Google talk are bundled into the device to improve its user friendliness.

Fantastic and the BEST phone with in this budget, Loving it.

I've purchased this thru FlipKart, ( my 2nd transaction with FlipKart so far), they are very much prompt on the delivery. I'm delighted again. Its been a month I bought this phone and now I want to post my review after getting familiar with the phone. Of course its lengthy but these are my honest thoughts.
Like many, I was also confused initially to decide on which one to go for, as there are lot of Andorid models available in the market. This is my 1st Android. I've done a lot of researc...
READ MORE

HTC is the Best because it is HTC!
Find out why!... here is the reason....
HTC Wildfire was the first HTC that I have bought 2-2.5 years back. I was confused whether I should go for samsung which costs 11000 to 12000 having same configuration or slightly better configuration or buy HTC Wildfire by paying 1500 to 2000 Rs more. But when I watched demo of HTC sense(a proprietary HTC feature which adds significant value in user experience) on youtube and experienced actual demo piece at nearby C...
READ MORE

Awesome Phone in every expect.

Very good phone, I am fully satisfied with the features and performance. So let's start the review with cons.

Cons
1. Processor=> The only big con about this phone is 'processor' ie 600MHZ./But this processor not less than samsung 800-1GHz processor in. It can run heavy games such as temple run with no issue. But sometimes you will feel some lag.
2. Camera=> If you want a good camera then don't go for this phone. Camera in this phone has fixed focus. And picture qualtiy is not good in low li...
READ MORE

bro.. i am not a user of this phone..
but i can clear your queries..

first of all if you seriously want know about a phone..watch the reviews on youtube..these are few youtube channels where you can find detailed review covery every aspect of this phone
igyaan by bharat nagpal
geekyranjit by ranjit
gadgets portal by sukesh banik

2>functions
it has the all ...
READ MORE

Best phone in this price range

It has been 2 days since I have got this phone. My first reaction at the box was: "Dude, its not the same box they shown in the unpacking videos in youtube", then after I opening I was least bothered about the box !!
Pros:
1. Great looks size and shape wise, although 3.5 inch screen, still quite compact feel (unlike Samsung Ace and all its "duos" counterparts).
2. Good build quality, doesn't feel like cheap plastic material.
3. Sound quality MIND BLOWING, using the default player, added an ...
READ MORE

I bought htc desire c a week ago and i am in love with my machine.\m/
Personally I think if you want to buy a decent phone with faboulous visuality, great battery life ,good performance during multi tasking ,then go and grab this one.
Desire C has nice experience over headphones due to beats audio system.

The competition is intense in this cost range and u get confused over which one to buy. We obviously have very high expectations and expecting everything from device we are going to buy and...
READ MORE

I bought it from the MobileStore yesterday.
I wanted a androphone around 10k n instead of Xperia Tipo I went to this.
This the most impressive android phone i hav ever seen..
+ so cheap...
+ just 98grams...only paper can be more heavier than this
+ strong build quality
+ 600Mhz n theres absolutely no lag..never hangs...
+ sense UI is amazing...
+ 1GB of Internal space...including maps,fb,flicker etc
+ ICS on-board...
+flash player pre installed...so no probs
+ very bright screen n
+ very ver...
READ MORE

Don't get confused guys.Bought this phone on 5th Nov.Overall it's a NICE PHONE.PFB my review on this:

Most of us get confused after reading the mixed reviews about any product we are wishing to buy and we fall in the serious dilemma of whether buying that stuff or not.TO be honest,I was in that state too before deciding on my this first android phone.So to avoid such confusions,I wanted to jot down my take on this product.
I had ordered this on flipkart last saturday and I received my HTC Desire C on this monday ie 5th Nov.So,I have used this phone for 5 days and I wanted to share my expe...
READ MORE

hello guys.
i m using this from the last three months. itz wonderful. no hanging problem. this phone is very solid as comparable to other android phones.
so my suggestion just go grab it.
itz look great and perhaps the operating system itz given 4.01 version i just upgrade to 4.03 version which is the latest. i.e. it is up-gradable.
READ MORE

the htc dezire c is a worthy phone. it has a processor of 600mhz but it only effects on d battery. while on performance is first class. it has a stunning look in polar white. plus a ice cream sandwich 4.0 which enable you to open a variety of android apps. still if u hav a problem go for a samsunge ace plus.
READ MORE

3
0
Permalink
Report Abuse
+
All 161 reviews
Have doubts regarding this product?
Safe and Secure Payments.Easy returns.100% Authentic products.
You might be interested in