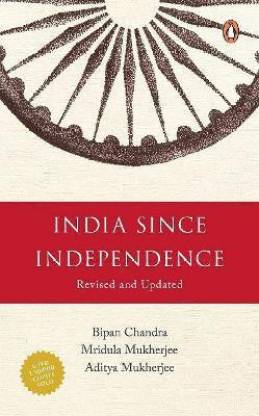 An insightful narration on how the world’s largest democracy, India, was forged, India Since Independence is the sequel to India's Struggle for Independence and was first published in 2008.

India Since Independence gives a succinct analysis of the various obstacles and challenges India had to face and overcome in her past, and her proudest and most successful moments in the century until independence.

The book narrates how the Constitution was drafted, and the development of economic and political agenda heavily influenced by Nehru. It also provides an insight into the fundamentals of foreign policies and an in-depth analysis of the different reforms in the Indian economy since 1991. The author scrutinizes various aspects like the problems in Punjab, the predominant practices of untouchability, and party politics in the Centre and states.

In addition to providing information on the decline of the National Democratic Alliance in 2004, and the resultant rise of United Progressive Alliance's power, it also discusses the deal that unravelled political consensuses, the Indo-US Nuclear Deal.

The book includes chapters like The Initial Years, The Colonial Legacy, Foreign Policy: The Nehru Era, The Rajiv Years, Agriculture Growth and the Green Revolution. The book has 41 chapters in total.

Dr. Bipan Chandra is a renowned Indian historian and author.

Born in Kangra Valley, Chandra completed his education from Stanford University in California and the University of Delhi. He dedicated several years of his life to teaching and was appointed Sectional President of the Indian History Congress. Chandra is considered to be one of the foremost scholars on Mahatma Gandhi, he is also adept in the economic and political history of modern India.

Mridula Mukherjee is an Indian author and Professor.

She has authored Peasants in India's Non-Violent Revolution and Colonializing Agriculture.

Mukherjee is currently the Professor of Modern Indian History at the Centre for Historical Studies, and is also the Director of Nehru Memorial Museum and Library. Her areas of interest are in peasant movements, agrarian history, and the national movement.

Aditya Mukherjee is an author and Professor at St. Stephen’s college in Delhi.

He also serves as the Director of the Jawaharlal Nehru Institute of Advanced Study at JNU, and his interests lie in capitalist development and modern business history. 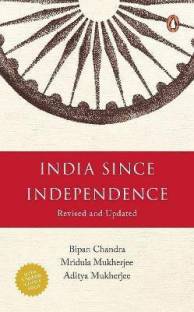 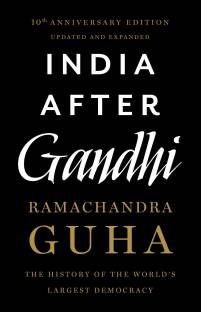 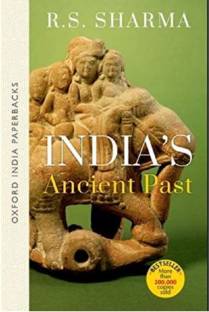 Good if you are preparing for UPSC but useless if you want an impartial view.

I,being a UPSC aspirant was recommended this book.very quickly i would write the review pointwise.


1.good insight into the govt. policies and will help in writing pro-govt. type of answers.
2.a strict NO if you want a neutral view of the happenings.( talks almost nothing abt the NDA Govt's achievements and brings up useless things to demean the nda govt. in kargil war and pokhran tests and other things )----reports about 1984 riots in half page and godhra riots in 4 pages.Also it defends la...
READ MORE

SUCCINCT IN TOTAL BUT LACKS IN ESSENTIAL

Good book to read who had great knowledge, for others one should be careful in reading it is a culmination of opinions not facts, Read it like an editorial in news paper. In my opinion History become more analytical now It is no more same as our Old scholars( authors) thinks, authors missed lot of points in this book and included which was irrelevant now. For more clarity opinions are fact based analysis and thoughts of a person, here person always environment ( Place(India,State,Didtrict..et...
READ MORE

PROS
1.explains various issues from academic POV i.e for writing answers in exam
2.if you check past years question paper of history optional direct quotes are picked up from this book to frame questions by UPSC

BIPIN CHANDRA VS RAMCHANDRA GUHA
1.bipin chandra is academic book i.e helpful in writing answers whereas R.guha's book is a novel where you have to take out gist of the issue
2.bipin chandra does not gi...
READ MORE

Informative for the Ignorant but left-inclined.

I liked this book very much as it is very informative for people like me who hasn't got an in-depth idea of India's modern history but would like to have one. Though this book is a good read to gain knowledge, I found that the writers are biased towards left-leaning centrism. They do not have a single good word for the rightist forces who also had a major contribution towards India's development. As a historian, one ought to have unbiased opinions. And also, I felt no matter how bad a Congres...
READ MORE

Though this book though sometimes gives a feel good factor about how everything went well in india.. but eventually readers are bound to feel that it is like a tribute to congress and gandhi family .. the whole agenda of books is to project anyone associated with congress as heroes. And people associated with BJP and RSS as communalists.

For instance of all the examples : in the starting of book Authors mention democraticaly chosen Govt of Kalyan singh as a rag tag coalition of criminals...
READ MORE

Flipkart is the best application in the world. I bought a lot of books. Also, I availed many offers and discounts on my purchases. The delivery service is better than all others. All the process is very fast. I never needed to refund. All the products are best here. I paid through Flipkart pay later because it is a simple and secure method to pay and Never faced any delay in the delivery. Also, the delivery boy was very polite.
READ MORE

Got the book after being delayed...
Was really excited to see it but the packaging was of really poor quality.
I have seen better packaging from less costly books.
Anyway it's readable tho
Really hope to finish it a month and as for the Book it really is a beautiful and detailed elaboration.
Bipin Chandra needs no introduction and this book really serves it purpose beautifully. ❤️

Although I had doubts between choosing Spectrum and India Since Independence, I know Spectrum is better on UPSC ...
READ MORE

a Salutation by Nehru-Gandhi loyalist

A beautiful attempt to placate the Nehru-Gandhi Dynasty. The author has defended the indefensible actions while glorifying all the good actions. I am impressed how conveniently he has managed to omit the achievements of non-congress, non-left governments, moreover found faults in their most successful acts. Clearly biased book but a must-read for loyalists.

This book has a lot of selective information and the explanations are questionable. Fortunately, there are better books out there.
READ MORE

Product delivered as promised by seller. Amazing next day delivery. Product recieved in great condition with proper packing from Flipkart.Paper quality is also at par.
However, Book has written from a ultra leftist perspective, hence author seems sometime very harsh on right wing. For example- In the opening introduction of the book Autgor goes-" Since independence, the gravest threat to Indian democrary is Riots against Muslims in Godhra(Gujarat), 2002. Really??? Gravest threat to Indian de...
READ MORE

Must read atleast once

The ideas that shaped our present political system are emereged from our past political thinkers and leaders who desigened the frame in which we are flourishing today. This book clearly mention the views and stands of post independent thinkers and leaders. Clearly mention the stand of Congress towards secular state, hindu and muslim ideologies, one can say that this book is little anti-RSS and pro congress in character, sometimes you can find that author is trying to defend the congress natio...
READ MORE