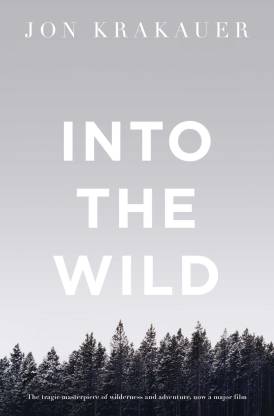 Into the wild is a book that is an exploration of the reasons behind the death of a young man, Chris McCandless. He abandons his possessions in order to experience solitude and explore the wild in his own way.

Chris, an intelligent young man who graduated with high grades, came from a wealthy and loving family. He was intelligent and graduated with double grades. However, this did not stop him from leaving everything behind and trekking into the wilderness where he could find a way to be close to nature. He was in search of something more deep and elusive in life. He had a yearning to explore and live a simple life. It was in the year of 1992 that he decided to give away his savings and start life anew and experience life in its simplest form. His family searched for him, but he had erased all tracks. Four months later they found his body in an abandoned bus. It was found by a moose hunter in a remote corner of the Denali National Park and Preserve, Alaska. Jon Krakauer, the author of this book, wrote an article about Chris in the year 1993 for the Outside magazine. The reactions to the young man’s story were different. Some said that he was foolish and got what he deserved while others were in awe of his courage to go out and find meaning to his life.

Jon Krakauer is an American writer and mountaineer. He is best known for his stories about the outdoors. He mostly wrote about mountain climbing. He has authored best-selling non-fiction books, like Into the Wild, Into Thin Air and Under the Banner of Heaven. 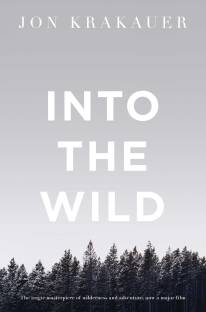 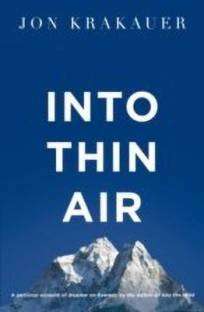 Great. Better than the movie

I first saw the movie, then got inspired to read the book. The movie was great, and the book, even more AMAZING!! Truly an inspirational and a heartwarming real life accounts by Jon Krakaur. LOVED IT!!!
READ MORE

For all those who are looking for inspiration

I bought this book after reading one of its quote " Happiness is only real when shared " . Its like the entire book is filled with words and sentences that will make you ache to do what he did. There are no happy endings, just reality in its truest form
A must read for all those who wants to fill the wanderlust inside of them.
READ MORE

The one which shakes you off!!!

Now words to explain about this book. Just an awesome work from Jon Krakauer. Also i bought the book from the inspiration i have gained by watching the movie. And thanks to flipkart for their good service. The product reached me on time.
READ MORE

Since I first saw the movie i was intrigued by such a real incident and when i came to know that its a book i just couldn't resist reading it. All along the pages I came to know a great young human being in Chris. The words he wrote were very heartful. And, kudos to the author, Jon Krakauer. He just did a great and outstanding non-fiction book. And especially the last sentence of the book just before the Epilogue will be a sentence that I will remember forever in my life.
READ MORE

The Most Inspirational Book I've Ever Read...

Book Is Too Great Than Movie '' INTO THE WILD ''...The Crzyness & Wilderness of Supertramp is Great Here...
The Life Is More than Money, Love, Fairness, Societly, The Beauty...

Many Thoughts & His Quotes Are So So Awesome For Me...Love You Chris...Oh Sorry, Alexander SuperTramp...

If You Little Bit Happy, The You Should Must Watch Movie '' INTO THE WILD ''

I Wanna Be a Like You Alexander SuperTramp...Love You Chris..You Were Great.
READ MORE

Not quite a page turner, but a good book towards the end. Pretty much detailed.
READ MORE

Good book. Have completed max chapter's but in between youl come across stories of similar people disappeared before mccandles and they aren't that interesting too go with when we are quite exited to know only about mccandles. I guess they are chapter 8, 9 & 10. Just ignore them if you don't find them interesting, so awesome book overall there is more than what you come across in movie , but before you start with this book it's better you watch movie and then start reading.
READ MORE

Personally, im in love with this book. its a perfect blend of the the protagonist's (Chris McCandless) letters, the authors comments and a sense of deep understanding of the protagonist's search for answers to life. There is a thrill of adventure mixed with life and its realities, giving this book a credibility and making it realistic.
Chris' search in various parts and ways is very similar to one's own search through life. it touches the heart and breaks it and is a must read for those who l...
READ MORE

Its a non fiction, learned about this book from some online blogs. I was travelling so thought to carry this book with me. And its just awesome read. The book takes you to Alaska and the wilderness.
A good read for those who love to read about adventures and specially wilderness. Though its based on real life story but what an inspiring story.

Loved the book, it moves you.
READ MORE

Hats off to Mr. Christopher Johnson McCandless for sacrificing his life to know the true meaning of life.
A great work and wonderful cautionary tale.
will love to read it again and will recommend to my friends
READ MORE