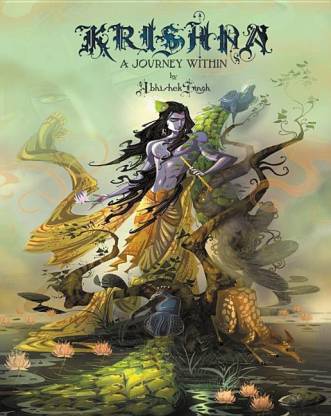 KRISHNA - A Journey Within, is a 300 page graphic novel that has been 4 years in the making, written and illustrated by Abhishek Singh, this first Indian Graphic novel by IMAGE Comics brings to you a searing  human portrayal of Krishna, the God of all gods. It is a journey through his pastimes that have swayed the ages, that witnesses the final confrontation between the fire of man's consuming greed to conquer all, and the supreme power of the divine spirit.

A preview of the book can be seen at http://abhiart.blogspot.in

About the Author
Abhishek Singh is an artist, graphic novelist and animation film designer whose work stands out as a unique blend of tradition and dynamic modernism. His past works include Ramayana 3392AD and Kali and Shiva for the India Authentic series for Virgin Comics which were collaborations with Shekhar Kapoor and Deepak Chopra. He has been a significant contributor for animation projects with Cartoon Network and UTV. Currently he's working on his upcoming solo art show called Dhyana Shakti, the second in a trilogy with The Nirula Family Company, while he simultaneously develops his next graphic novel.

A Great Take on an Old Classic

Krishna's printed by Image, who've done a fantastic job putting out a comic for what could be a limited market. The quality of the print is decent, although if I were to compare the quality of the print to other similarly priced Image releases, I'd saw Krishna suffers heavily in this regards. An example would be the Mice Templar Hardcovers that are absolutely beautiful and priced the same as Krishna. It would have been nice to have had a Hardcover with the art of the book resized to the art-b...
READ MORE

FOUR YEARS WITH GOD HIMSELF..

The day i got this gift,i was jumping with joy to see the inside of this beautifully rendered journey.A remarkable body of work filled with breathtaking visuals .Impressions of the Old stories told in schools and by my naani maa about Krishna,revisited me with a point of view never told from.
God portrayed in human form with all the awe and beauty around him.Somewhere i paused to feel the presence of the silence and peace with krishna in the panels.The text so minimal that it gently shifts ...
READ MORE

Sublime is the word

I received this book half-hour back, read the first 10 pages and impatiently peeked at the rest.

Been re-writing this review over and over. Dont exactly know where to start. How does one review a work that touches the deepest part of ones being? And that too a comic book, a comic book on Sri Krishna! Can the greatest Avatar be rendered effectively in comic form, how different would it be from other attempts? Sri Krishna's life was colorful, to put it mildly. He participated in every shade of...
READ MORE

Epic Awesomeness is an under statement.

This is not a book. It is a Magnum Opus. Abhishek Singh take a bow!

Had been following up this at Comic Cons and Animation festivals and eagerly awaiting its release. Finally got my copy today. My personally autographed copy.

Its so huge.. so obviously I haven't read it yet. (Shall post a detailed review later). But just the overall look and feel of this book in my hand.. well.. it feels awesome to say the least. Very much recommended for everyone, you must have one in your family.

This is...
READ MORE

Krishna: A Journey Within

Well, i have been following Abhishek Singh author & artist of this classic journey thru the story building via the artworks. I can confess here that the journey is an unusual masterpiece & presents Krishna & others in different forms as so different from formatted characters-that there is a virtual stray.The arc of mystery that shrouds his creations clear the air towards the end-presenting a Krishna of sorts-a Krishna away from the mold, he may not represent 'father's Krishna'-but the transit...
READ MORE

This is something i cant describe in enough words.the book is pure magic.my vocab isn't big enough for this masterpiece.the efforts put into making this graphic novel is visible from page one.just couldn't keep it down.the strokes are sublime,the colours vibrant,the expressions priceless ,the background scenic ,the characters picture perfect.
this is one book every comic book fan must buy
go ahead and please your order to enjoy sheer awesomeness.
READ MORE

How does one describe or start writing a review for something which is so unimaginably beautiful. It is infinite in its ability to provide satisfaction for having made a right call to invest in a piece of art, yes it is a piece of art with numerous full page layouts standing on their own to be displayed blown out in your haute drawing rooms or unblemished walls of an art gallery. In today’s day and age where eBooks are the #trend, you need a book like “Krishna: A journey within” to remind us...
READ MORE

The story of Krishna has been told countless times, with every author & artist rendering the tale his/her own vision & interpretation. This beautiful book, with its highly stylised, and yet extremely powerful and attractive visuals, allow the author to tell that story once again, but this time in a voice that resonates with our modern existence. It tells about events, emotions and ambitions that continue to shape our destiny. Most importantly, it asks us to face the real sources of evil rathe...
READ MORE

A Beautiful Visual Journey of the most beautiful being

Was lucky to get one of the earliest and autographed (with sketch) copies of Abhishek Singh's Krishna A Journey Within. The book is an absolute visual treat. I loved the way Abhishek has shown the story of Krishna and the famous incidences associated with him while illustrating beautifully the journey of never ending hope. You could feel the beauty of Vrindavan, would shudder at the cruel depiction of Kamsa, get mesmerized by the joy of Rasa Leela, get amazed by the battle of Kurukshetra, fee...
READ MORE

Indian Comics have come of age..

It is great to see Indian comics come of age. Campfire has published several, many of which I have purchased, each one is excellent. I would rate them among the best globally that I have seen.

The story line and illustration is excellent. So is the production quality. As the title indicates, this title is psychological / introspective. It therefore requires a degree of maturity for the reader to be able to appreciate it.

Flipkart's service, as usual has been excellent.
READ MORE