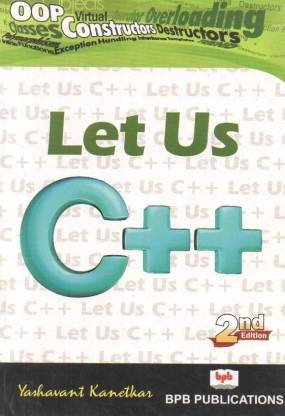 Sold Out
This item is currently out of stock
Author
Kanetkar Yashavant P.
Read More
Highlights

Let Us C++ is a guidebook to help programmers master the programming language C++.

The book begins with the fundamentals of C++ and then gradually proceeds to the relatively advanced topics. The concepts are explained in a simple and lucid manner, and are supplemented by relevant examples. The book not only helps readers grasp the concepts of C++, but also helps them understand the underlying principles and logic.

This edition of Let Us C++ was published in 2002 by BPB Publications. It comes with a complimentary CD-ROM that contains MATLAB examples and demos.

Kanetkar is a Mechanical Engineering graduate of Veermata Jijabai Technology Institute. He also has a Masters degree from IIT Kanpur. He regularly contributes to publications like Developer 2.0 and Express Computers. He also speaks on various subjects related to technology.

Kanetkar’s contribution to the field of computer programming has earned him the 'Microsoft Most Valuable Professional' award and the 'Best .NET Technical Contributor' award from Microsoft. He has established KICIT, a company that prepares course material for object-oriented technologies such as .NET, MFC, and C++. Kanetkar has mentored IT professionals for several years and continues to do so.

So it's my 2nd Semester in B.tech CS, I didn't knew any programming language , My professor suggested this book and it turns out to be great for start from scratch , If you already know all the basics then go for some advanced book otherwise I'll recommend this one.Also it was shipped in excellent condition and packaging.
READ MORE

its a beginning level book who don't know C. also I can say this is a school level book.
if you wants to master in c better avoid this book. better start from 'c in depth' by srivastava as per my opinion.
READ MORE

the book is good for beginners
on some. page printing page not good but this book is very helpful
READ MORE

I don't like this book at all.Won't recommend to anyone...It teaches bad programming style...doesn't care about standards and is full of toy examples that do no good when you sit for serious coding.I'll Strongly Recommend C++ The Complete Reference by Herbert Schildt
READ MORE

Soft verson of a book is really helpful for them who wanta to read anywhere. The main point is I like the book.
Helpful.
READ MORE

This book has all basics knowledge building concept needed for OOP languages.
Go for it without hesitation. Just book is not enough you have to do practice is also an important to be fluent on programming.
READ MORE

This book is very useful for c learner specially for Neilit 'O' level course . This book comes with the basic guidence of c language from the very beginning.
READ MORE

the language is simple and easy.

this is the book every newbie needs.

Unlike most other books which take a 'introduce and just define bluntly' approach.
READ MORE