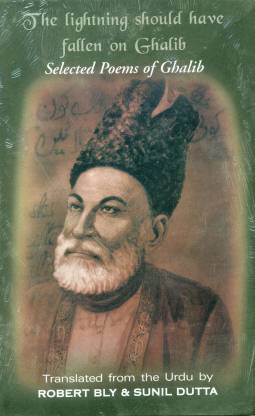 The Lightning Should Have Fallen on Ghalib (English, Paperback, Thapar G.D.)

The Lightning Should Have Fallen on Ghalib  (English, Paperback, Thapar G.D.)

Sold Out
This item is currently out of stock
Author
Thapar G.D.
Read More
Highlights

The Lightning Should Have Fallen on Ghalib contains selected poems of Ghalib, translated from Urdu by Robert Bly and Sunil Dutta.

Ghalib was a celebrated Urdu and Persian poet. He spent much of his life in Delhi, and bore witness to the British conquest of the city in the year 1857. Ghalib followed the tradition of Hafez and Rumi, but his poetry is unique in a way that they depict his spiritual struggles and the unadorned honesty, with which he writes and speaks to a universal audience. This book has a collection of thirty ghazals, signifying Ghalib’s mastery of a graceful poetic form admired for centuries.

Robert Bly is an author, editor and translator of several works of poetry and prose. His works include: Eating the Honey of Words: New and Selected Poems, Meditations on the Insatiable Soul as well as Iron John, The Soul Is Here for Its Own Joy: Sacred Poems from Many Cultures, The Sibling Society, and The Maiden King, written with Marion Woodman. He currently lives in Minnesota.

Sunil Dutta is a biologist and a student of classical Indian music and literature. He has played a significant role in an endeavour to preserve the ancient Indian musical tradition of 'Dhrupad'. He currently lives in Los Angeles.

Reviews - The Lightning Should Have Fallen on Ghalib

Editorial Reviews
Review
"An invigorating bouquet of ghazals, witty and astonishing and deliciously difficult,from a poet who deserves to be better known in the West--and is bound tobe, after this book. " -- Chitra Banerjee Divakaruni, The Mistress Of Spices

"How fine it is to see a new collection of Ghalib brought into English. His ghazalsoffer spiritual and emotional wisdom, scope, self-knowledge, beauty, and a way of leapingfrom statement to statement whose influence on American poetry is...
READ MORE

Amazing work , the English translation fails to catch the complete essence of the words but that's fine'cause its practically impossible to get 100%from a translation , overall great work
READ MORE