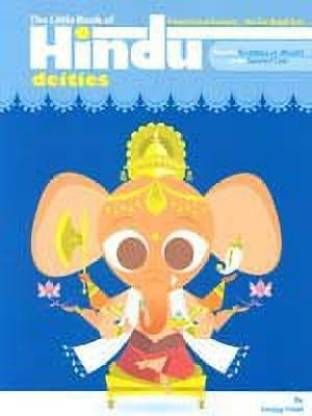 The Little Book Of Hindu Deities provides an introduction to the Hindu pantheon. With cute looking illustrations and short interesting introductions, this is a great book for those who want to learn about Hindu Gods.

Hindu legends and epics contain so many interesting characters, that it is difficult to keep track of all of them even for a person who is familiar with Hindu epics. It can get pretty confusing for someone who is new to the world of Hindu beliefs and traditions.

The Little Book Of Hindu Deities, written and illustrated by a Pixar animator, provides an informal and perky introduction to various Hindu Gods. Along with cute illustrations and colorful text, the descriptions are lighthearted and informative.

The tales of the Hindu Gods involve everything from romance to wars, with the supporting characters ranging from divine beings to monsters. These interesting stories are recounted with verve and humor in this book. It answers questions like why Goddess Kali is black and why Ganesha has an elephant head. It contains vivid and short profiles of not just the more well known gods, like Vishnu, Shiva, Rama and Krishna, but also deities like Agni and Garuda.

The book contains tales of all the Gods and Goddesses with captivating illustrations that evoke the Japanese cartoon style. The images are all innocent faced with huge wide eyed cuteness, including those of the fierce deities like Kali and Bhairava. Each deity is covered in two pages, one page containing the illustration and the other, the story of that God. The information provided is short and full of humor, appealing to a new generation of readers.

The Little Book Of Hindu Deities not only covers stories of Gods and Goddesses, but it also introduces major epics. So along with the stories of Lakshmi and Saraswati, readers are also introduced to the stories of Rama and Sita, the great epic Mahabharata, and the interesting philosophical work, the Bhagavad Gita.

Sanjay Patel is a storyboard artist and animator.

Other books by this author are Ghee Happy Journal, The Big Poster Book of Hindu Deities, and Ramayana: Divine Loophole.

Sanjay Patel was born in England and grew up in the US. He is now a supervisory animator at Pixar. He has worked on movies like Toy Story 2, A Bug’s Life and The Incredibles. He has used his artistic skills to present a fascinating introduction to the Hindu faith and its Gods.

the book has amazing pictures of Hindu gods in typical pop art style. way the author has tried to tell the story of each deity in a brief and humorous way is quite appealing. in modern age, where kids barely get to know who is who among so many Hindu gods, this comes as a way to generate interest through quirky lines and trendy pop art. kudos to sanjay patel ji!

Kids will just love this :) Gives them a good learning while keep the fun alive, Great for adults to read as well.
READ MORE

I really liked this book.

This a very good book for kids to know our India mythology.
And the simple narrative makes it a easy read.
The best part of this book is while telling stories, its not judgemental at all or it does not evoke any religious feelings.

This is an awesome book that can be gifted or even bought for oneself to just admire or learn more about hindu dieties ! Its like so eye catching that when I first bought the book for my niece , I realized I needed one for myself too ! It is damn attractive and colorful that every kid will learn a lot and easily become a kid's fave book !
Definitely worth the buy !
READ MORE

must buy, for self and for gifting

I found the book very interesting,a visual treat!
Actually,I had ordered it for myself as I was seeking
some philosophical and semantic explanations on the Indian
mythological entities.Ganesh,for instance,a brief discourse
on symbolism.However I think it makes a good gift for kids,
so I gifted it to my Grandson.The illustrations are fabulous,
so maybe I'll buy one for myself as well.
READ MORE

A must buy for anyone wanting to introduce their little ones to the Hindu Religion in an innovative and funky way !!
READ MORE

It makes a good gift for kids

I bought 2 copies of this book for my nieces. The artwork is simply beautiful. The write-ups for the deities are simple and easy-to-understand. I don't think there's much else that one could want from a book like this. It's perfect if you have children or you're looking for a gift for a child you know.
READ MORE