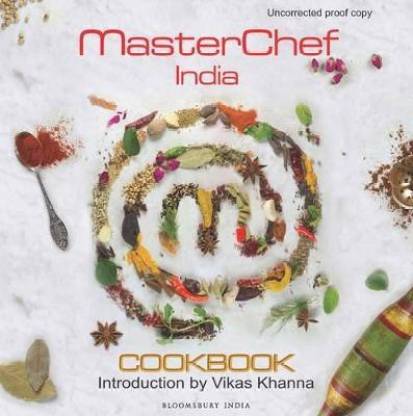 Imagine the thought of savoring a dish made by a contestant on MasterChef India. The only difference is that the dish is now made by you.

So, we have had three seasons of Masterchef India until now. Each season may have had more than a hundred recipes. A hundred recipes are not very easy to remember. While you may not want all of them, you might, actually find some among them that you would definitely want to try. After all, these are the recipes of the top masterchef contestants in the country. Would you like to have a masterchef kitchen in your very own home, excluding the judges of course. Would you like to cook a masterchef dish, with all the ingredients and recipes right under your nose? Vikas Khanna has complied all the recipes from all the three seasons of Masterchef in this book.

Vikas Khanna is an Indian chef, food writer, restaurateur, humanitarian and film maker who lives in New York. He has also hosted the TV show MasterChef India. Vikas’s lessons on the art of Indian cuisine dates back to his childhood where he was surrounded by traditional home food and other delicacies. He graduated with a degree in hotel administration and then went on to get himself trained by chefs from the Oberois, the Leela Group and the Taj. His experiences involve working with some of the world’s most honored chefs.

This book is a joke. Measurements are so out of proportions. Their Chhole recipe requires 1 Kg Kabuli chana. Serves 4. Really ?? It can easily serve 40. Similarly, Moong and Spinach Khichadi. 1/2 Kg rice, 1/4 Kg Moong Dal, 1/2 Kg onion. Serves 4. It can easily serve 20 people. Every recipe is full of goofs. Items are mentioned in the ingredient list, but no mention in the process.
READ MORE

2
5
Permalink
Report Abuse
Have doubts regarding this product?
Safe and Secure Payments.Easy returns.100% Authentic products.
You might be interested in