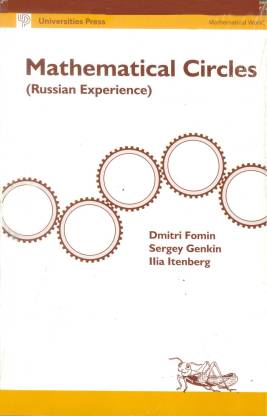 Mathematical Circles were associations of students and teachers of mathematics that were formed to promote interest in studying mathematics among secondary school students.

Mathematical Circles (Russian Experience) is divided into two parts. The problems in the book are designed for a two year extracurricular course in maths. The first part covers problems for the first year, aimed at younger students, between 10-11 years. The second part contains more complex problems, for older students with a better understanding of mathematical theories and problems. The book uses games and other activities to present mathematical theorems and methods. The same game or activity is sometimes used in various chapters, each time illustrating a different and more advanced concept.

The first part covering the First Year of Education, begins with Chapter Zero. This chapter just assesses the student's skill in mathematics and logic. From the subsequent chapter, seven chapters cover mathematical topics. The eighth chapter is a chapter of problems that test the students on the concepts taught in the first year. The second part, for The Second Year of Education, covers more advanced concepts in nine chapters. This section also ends with a chapter of problems based on the mathematical concepts covered in the previous chapters.

There are three appendix sections. The first section describes the types of mathematical contests that were popular in the former Soviet Union. The second appendix contains solutions or hints and answers to most of the problems in the book. The third appendix provides a list of references used in the book.

Dmitri Fomin is a software engineer.

Dmitri Fomin studied at St. Petersburg State University. He has worked at Citibank in its assets and foreign currency department as an analyst. He is now with the software firm PTC, as the Director of Research and Development.

Sergey Genkin is a software professional.

Sergey Genkin has a Master’s Degree in Mathematics from St. Petersburg State University. He has worked with Lenelektronmash in St. Petersburg, and later at MicroPress, Inc. in New York. He joined Microsoft in 1995. He has been part of the development team in many of the company’s major products like Word, Internet Explorer and Silverlight. He is now a lead software developer at the company.

Ilia Itenberg is a professor.

Ilia Itenberg has written numerous technical papers and articles. He is now a Professor at the Institute of Mathematics of Jussieu.

I bought it in 10th but never read it properly at that time. But when I started doing it seriously in 11th, I was amazed at its approach. Its teaching style is completely different from routine Indian mathematics books.

It first gives the reader some basic ideas and concepts and then teaches further important concepts through problems. It game me a sense of accomplishment as I progressed further. This problem solving approach is what lacks in routine books. Definitely an eye opener.

Mathematical Circles : A Book You Must NOT SKIP

Its a book that rekindles joy and happiness in me. And here I write a true review for it

This book is great if you are preparing for Olympiads. Even if you have lost touch with math, you can just pick it up and enjoy. It teaches math is an excellent and flawless manner. It makes a fantastic book for any age group. It has versatile and diverse areas covered and its a must for your bookshelf.
READ MORE

Not Just an Olympiad Book

This is a great book for anyone who as nick for logical thinking and maths.
I bought this book when I in 11th class, now I'm in college and I still solve it for the recreational Mathematics.This book tell teaches you the very core ideas of Mathematical thinking, in a very simple manner and the best thing is you don't need to have a mathematical background to enjoy and use this book.
READ MORE

a book that would keep its claims and not just befool you.it is really a very handy and not the less outstanding for rmo,inmo,imo aspirants.it brings in the best in class problems that need skill to fully prepare you for the olympiad.
READ MORE

A book you can depend on

Great product embedded with questions of good quality but if you have Challenges and thrills of pre ............. then i am not gonna recommend you to buy this .But still if you if you want to abate your difficulties then this one is good book to go with
READ MORE

Very helpful for students wanting to appear for any maths related entrance exams. This is a recommended book for CMI entrance and if you master it, you can get into CMI quite easily.
READ MORE

excellent but four stars only because answers were not provided to some questions.
too good for olympiad foundation.the type of attention paid to chapters like divisibility is amazing.
combinatorics is excellently covered. a masterpiece of russian mathematical intelligence
READ MORE

Excellent book on Number Theory, Calculus and Puzzles for children and adults

I strongly recommend this book to all the children to get introduced in an intuitive way to some of the basics of Mathematics in Calculus, Number Theory, Puzzles, etc. The way the authors have written this book is awesome. It feels like reading a thriller novel. Simply superb.
READ MORE

When I first bought this book, I was dumbstruck at the advanced maths of the Soviet Union. Written around 1989, This book is just fabulous. It has wide ranging topics from Combinatorics to Induction. It lets you yourself prove things.
A very interactive book, I have benefitted greatly.
This book is also featured in the reference of IMO.
I strongly recommend this book for those who are appearing in RMO.
READ MORE

A must for beginners if you aspire for the Regional and national math olympiads. It includes the elementary applications of unconventional problem solving techniques, highlyyy recomended for the math olympiad
READ MORE