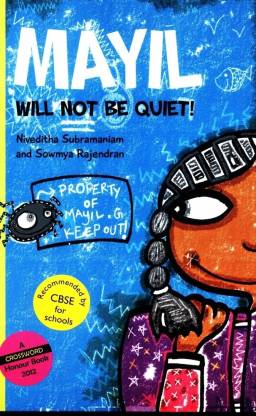 Mayil Will Not be Quiet (English, Paperback, Subramaniam Niveditha)

Mayil Will Not be Quiet  (English, Paperback, Subramaniam Niveditha)

Mayil Will Not Be Quiet is a book that is based on the diary of a twelve year old, who is outspoken and curious, and details her experiences as she grows up.

In this book, Mayil Will Not Be Quiet, the readers are introduced to Mayil, who is a twelve year old girl going through certain experiences in her life. This book is actually Mayil’s diary, which is given to her by her father, after getting tired of her constant prattling.

Mayil begins to pen down her experiences in school, which include rigorous projects, assignments, gangs, gossiping, and being harassed by boys, one of whom she even slaps. She also notes down her desire to move out on her own, and just enjoy life.

Mayil also writes about other things in her diary. Some of these notes are about her grandfather and father cooking, as her father lost his job and her mother got one. She also speaks of her brother, who has a liking for karate. Due to her perky nature, the experiences noted down by Mayil in her diary will keep readers in splits throughout. Although this book is written for pre-teens, children in the age range of 9-10 will greatly enjoy reading this book as well.

Niveditha Subramaniam is a well-known author from India.

Subramaniam holds a bachelor’s degree from Stella Maris College, Chennai, studying English Literature. In the past, she has also been a creative writer for a children’s magazine. Passionate about photography, Subramanian has also attended Light and Life Academy, where she studied photojournalism. She is currently working on a bilingual book.

The author of this book, Sowmya Rajendran, is also a well-known illustrator from India.

Till date, Rajendran has released 11 picture books. Some of the literary works of the author include Six In The Underwater Friends Series, Monday To Sunday, and The Snow King’s Daughter.

Born on the 4th of March, 1986, Rajendran attended Padma Seshadri Bala Bhavan School, Chennai. Following that, she completed her bachelor’s degree from Stella Maris College, studying English. She later went on to graduate from the University of Sussex, UK, completing a master’s degree in Gender Studies. Rajendran has also written a number of short stories for several magazines.

Mayil will not be Quiet and shouldn't be!

I bought the book as a gift for my 11 year old niece and we both ended up loving the book!

Mayil is someone most of us growing up in middle class India can relate to. In my opinion, that in itself is a commendable achievement, seeing the number of books with too-precocious-to-be-true kind of protagonists. The book is very appealing because, it approaches adolescence in an honest, child like way.

If you are not twelve years old, it makes you remember what it was to be a 12 year old, and the...
READ MORE

Mayil- as colourful as her words

Very nicely written...delves beautifully into the life of a typical 12 year old, exploring her questions, doubts, joys, confusions and fears in a way each one of us would be able to relate to...and invariably experienced around that stage of our lives...took me back to many many moments from my school days and vivid memories of my friends and classmates...
READ MORE

It is an awesome book for a pre teen like me .
READ MORE

Religion And Belief Books
Min. 40% Off
Shop Now
Back to top