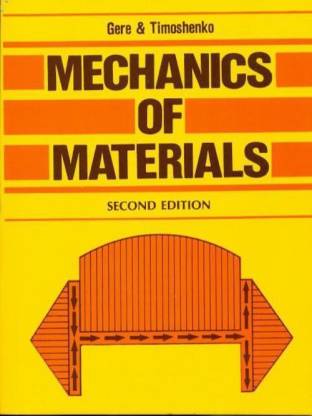 Mechanics of Materials is a must-have for all civil and mechanical engineers. The authors have covered a wide range of topics comprehensively and have presented them in a logical and structured format.

Mechanics of Materials covers standard topics that civil and mechanical engineers must study. It includes topics such as elasticity, stress and strain. In the world of engineering, this book is considered to be essential for all students.

Mechanics of Materials includes illustrations, examples and homework assignments for each section, spread out in over 750 pages. There are numerous examples of complex problems accompanied by step-by-step solutions. Worldwide, both students and teachers have been using this textbook since it was first released in 1972.

Stephen P. Timoshenko is considered to be the father of modern mechanical engineering.

S. Timoshenko’s books range from courses in first year undergraduate to advanced graduate students. Some of the books he had written are, Theory of Plates and Shells, Advanced Dynamics and History of The Strength of Materials from 1925 to 1972.

The Ukrainian-American author’s contribution in the field of engineering and his impact on education is unprecedented. His clear and logical style of writing in his textbooks and technical papers have inspired and taught generations of structural engineers all over the world.

He was born in Ukraine but later moved to America, and became a professor at the Stanford University in 1936. He passed away in 1972.

He authored nine textbooks, starting with Mechanics of Materials. Some of his other works include Matrix Algebra for Engineers and Moment Distribution. In 1974, he co-founded the John A. Blume Earthquake Engineering Center at the Stanford University, of which he was a professor. He travelled worldwide as well as to Yosemite and the Grand Canyon national parks, to study these earthquake prone areas.

He was married to his childhood sweetheart for 61 years, till his death. He is now survived by his wife and three children. 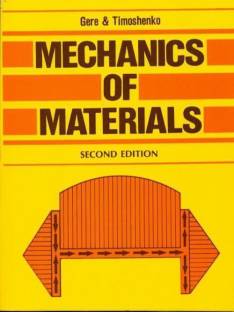 This is really a good book. If you want the feelings of this subject, you must have this book. I am in search of this book from past one year on several book stores but unable to find it. Finally, I got the last copy of this book available at flipkart store. Although, the book is available in market but in name of strength of material by gere and goodno. The available book is also good, but this book is the best. Some topics are very nicely explained in this book. A mechanical and a civil eng...
READ MORE

This is probably the best book i have read recently on Strength Of materials subject. Indian writers tend to just describe formulas and derivations without answering the questions why and when. This book does so.
While reading the book, it will feel like Stephen Timoshenko and Gere themselves are describing the subject matter in front of you. You wont feel lost at the end of the reading. The authors have tried to describe the phenomenons in the best possible way so that one can link all the ...
READ MORE

Source of all the books,Authentic Material,Book by creater of subject.

It was delivered by flipkart in 2-3 working days and i received book well packed in good condition, thanks to flipkart for their great services.
This is really a great reference book and even the made easy notes for GATE/IES are made from this book for the subject.This book is recommended reference book for the subject by many leading coaching institutes for GATE and IES. It is a must buy book if you are preparing for GATE/IES.In this book concepts are explained keeping in mind that reader kn...
READ MORE

I usually don't write reviews for anything but after reading this book I thought of writing one.
The method of explaining the concepts in this book is excellent and easy to understand which will help the readers to have a strong grasp over the basic concepts of the subject. I strongly recommend this book for civil and mechanical engineering students.
READ MORE

This is very very good ... no no... its best among othres yaar. I go through this and recommend to my students for deep preparation in MOM. usefull tool for ESE & CIVIL SERVICES EXXAM bcoz it create strong base for S.E.D & STRUCTURE...

Flipkart is always cool.Got the book in 4 days & nicely packed.About the book: Essential book for every mechanics student....Nice explanations of fundamental concepts by Mechanics giant Timoshenko.Also the book is available at a very reasonable price.
READ MORE

Awesome book, I just love it, all concepts are well explained. Best book for competitive exam like gate, ese, isro etc if you love this subject, don't be hesitate just go for it. All the Numericals are tremendous and no repetition is there in Numerical. Thats makes different from other book
READ MORE

A MUST IF YOU ARE AN ENG GRAD STUDENT

This is a very good book.One of my friends(GOD Bless him) recommended it.But I am terribly let down by Flip kart's service this time. 12 pages are left blank(not printed).(and no exchange on books) I will note down some points so that it will help you make up your mind, but I will also recommend you to go and check this book out at nearby store before you buy.(See this way you wont blame me if you don't like the book,but I bet you will)
Review:
Concepts and clarity : 5/5
Language Difficulty...
READ MORE

One of the most beautiful books in strength of material. Language is clean and lucid. Concepts are well explained. You will never regret buying this as it clears everything from its fundamentals. Highly recommended if you want true knowledge in the subject. Helpful in competitions like GATE, BARC, Engg. Services Examinations etc. It may disappoint you a little if you are a fan of Khurmi's & Rajput's worthlessness and looking only to pass the semester.
Publishers Please try to release the lat...
READ MORE

Excellent Coverage. All types of topics are covered in lucid manner. The main concept is so nicely explained that you fall in love with the subject.
Give it a try even if you don't like SOM.
READ MORE