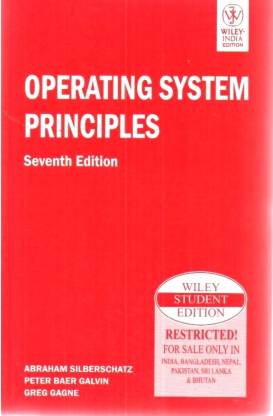 Operating System Principles presents extensive resource material on the fundamentals of operating systems. It is divided into eight parts and begins with an introduction to operating systems and system structures. The second part deals with process management. It covers concepts like process-concept, multi-threaded programming, and process scheduling.

The book ends with three appendices that present information about UNIX BSD, the Mach system, and Windows 2000. It has been thoroughly revised and updated from previous editions to include the latest advancements in the field. It has also been modified to improve concept coverage and narrow the gap between theoretical explanations and practical applications. Numerous lab projects, exercises, and review questions are also included for practice.

The book was published in 2006 by Wiley. It has received positive reviews for its detailed and solid coverage of the fundamentals of operating systems.

Greg Gagne is a computer professional, instructor, and researcher.

He is the chief technologist at Corporate Technologies. He also works at the Westminster College in Salt Lake City where he teaches operating systems, distributed systems, data structures, and object-oriented programming. Gagne’s research interests lie in distributed computing and next-generation operating systems.

Abraham Silberschatz is a software professional, consultant, instructor, and author.

He has been involved in the software industry as well as academia and has held important positions at the University of Texas, Austin, and the Information Sciences Research Center at Bell Laboratories, Murray Hill, New Jersey. His research interests include network management, distributed systems, operating systems, and database systems. His work has won him several awards and honors, including the ACM Karl V. Karlstrom Outstanding Educator Award (1998), and the 2002 IEEE Taylor L. Booth Education Award.

Peter Galvin is a software professional, consultant, and trainer.

He has conducted several training sessions on system administration and security. He has also contributed to various magazines such as Byte. In the past, Galvin worked as the systems manager in the Computer Science Department at Brown University.

It is a wonderful book of operating system. Very simple, easy language, clear description about each and every topic. Those who want to start with knowledge of O.S. must surely go for this book. The book is gud for theoretical portion, but if one want to go for numerical portion then must try any other book as numerical section is limited.
READ MORE

in-depth concept..... are there in this book.
Awesome.. book for preparation.
thanks for seller and flip kart
READ MORE

good book for the beginners. but delivery was too bad
READ MORE

This is a good book for Studying Operating System in details.
It's lucidly written and hence is easy to understand.
READ MORE

You will enjoy reading it , and as you continue further your knowledge in OS will boost up. Try this out friends , no doubt you wont regret reading it . And the best thing about this is that you the language is quite easy except for few chapters
READ MORE