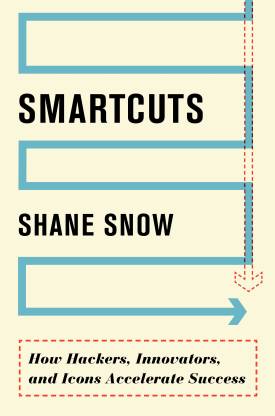 Description
Entrepreneur and journalist Shane Snow (Wired, Fast Company, The New Yorker and co-founder of Contently) analyzes the lives of people and companies that do incredible things in implausibly short time. How do some start ups go from zero to billions in mere months? How did Alexander the Great, YouTube tycoon Michelle Phan and Tonight Show host Jimmy Fallon climb to the top in less time than it takes most of us to get a promotion? What do high-growth businesses, world-class heart surgeons and underdog marketers do in common to beat the norm?One way or another, they do it like computer hackers. They employ what psychologists call 'lateral thinking' to rethink convention and break 'rules' that aren't rules.These are not shortcuts, which produce often dubious short-term gains, but ethical 'smartcuts' that eliminate unnecessary effort and yield sustainable momentum. In Smartcuts, Snow shatters common wisdom about success, revealing how conventions like 'paying dues' prevent progress, why kids shouldnt learn times tables and how, paradoxically, it's easier to build a huge business than a small one. From SpaceX to The Cuban Revolution, from Ferrari to Skrillex, Smartcuts is a narrative adventure that busts old myths about success and shows how innovators and icons do the incredible by working smarter and how perhaps the rest of us can, too.

Shane Snow is an entrepreneur and journalist who is the ultimate life hacker. His company, Contently, is valued at more than $30 million, yet two years ago, it didn't exist. He writes features for Wired Magazine, yet a few months before his first feature he had no bylines to his name. He's raised millions of dollars from top venture capitalists and created technology that's helped more than 10,000 journalists build their personal brands and get work, yet three years ago he didn't know what a term sheet was.
Read More
Specifications
Manufacturing, Packaging and Import Info
Ratings & Reviews
4.7
★
6 Ratings &
2 Reviews
5

One of the Management Best Books I've ever come across.

Shane has an amazingly candid way of explaining in this book, even the most intrinsic dogmas of Management. In a very simple language he explains how the smart-cuts are different from conventionally opted-for short-cuts and how one can hack their way to riches.
Truly a wonderful read. Looking forward to further writing from you Shane. Keep the rocking good work on.
READ MORE

Excellent read for any aspiring person

This book lays out some counter-intuitive examples of how success is really brought about by first-principles, and yet in a different hacker way - every time. Great story-telling style - you might find yourself going aha! every now and then.
READ MORE