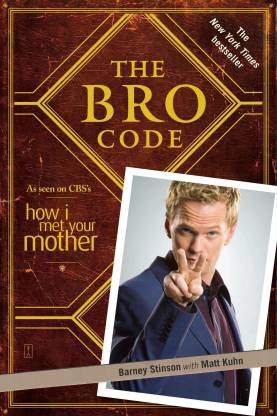 The Bro Code provides a set of rules for men to transform into ‘Bros’. It is written by the Ultimate Bro of the hit television series How I Met Your Mother, Barney Stinson, in a comical yet true manner. The rules which were conveyed only verbally till now have been registered and printed for the first time.

After the enormous popularity of his character on the hit television show How I Met Your Mother as the Ultimate Bro, Barney Stinson brings together his set of rules for men to become ‘bros’. Written in Barney’s first person narrative, this book contains ways (articles) by which men can change themselves into Bros and can face the ultimate challenge of the society.

Supposedly considered to be the Holy Grail of the bros of the world, this is the first time that these set of rules have been documented and published. According to Barney, these rules were transferred across generations verbally and he had to go around the world to accumulate them and write them down.

The book provides an entertaining read as the author engages in the fitting Bro Codes in very natural circumstances. Questions like “Can only dudes be Bros?” or “Who is your Bro?” or “Why a bro never wears jeans to a strip club?”  get answered with an apt logical explanation. Barney Stinson lets out his wisdom and sets the guidelines for the correct code of conduct for his clan. Within his articles he even uses bar-charts and graphs to make the readers understand.

Every man’s life is governed by a set of principles, a set of values that define his character. Some call it religion, some call it ethics but Barney Stinson calls it ‘The Bro Code’.

Barney Stinson is a fictional character played by Neil Patrick Harris in a popular sitcom How I Met Your Mother. His breakout character is of this awesome dude living in New York who seduces women with his wealth.

Barney works as the managing director of the Goliath National Bank and is popularly known as the ‘bro’ of another character from the series, Ted. Barney is very rich and often buys expensive items. He wears a suit and prefers clinging on to his friends because of a disturbed childhood. Abandoned by his father at a young age, Barney himself has abandonment issues sometimes referred to as ‘daddy issues’. He plays the role of a Casanova who hangs around with women very frequently without having any intention of having a long term relationship. The character has been well received by audience as well as the critics, and it is one of the main reasons for the success of the show. 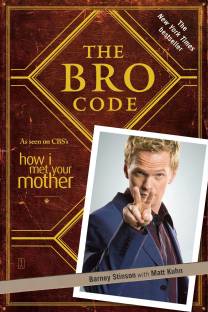 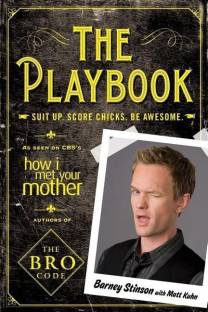 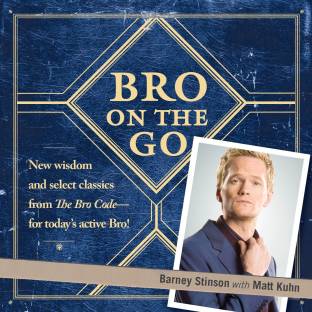 Bought this book as a fan of 'How I met your mother'...
The book was as expected Outstanding...
Wasn't disappointed from the content...
The pages were blackish giving look of 60 years old book...
Thought the print of piece is bad...
Thanks to flipkart, They changed the piece within 3 days...
But the changed piece is also same, i.e. Blackish...
If print quality doesn't matter, go for it as it is a best buy in price...
But a nice print book is available at the price of ~700...
READ MORE

Its a good read if you have seen how i met your mother and love the series. You need to like Barney Stinson to like the book.
READ MORE

“ ... And everything of need was provided in that Garden - Fruit, water and companionship. But one day, Adam came upon a naked chick, Eve, and desired her olive leaf. And so, Adam wenteth behind and apple tree to know Eve, totally ditching his Bro, Phil, who had Knicks tickets, Courtside. Long story short, humankind became self-aware, paradise was lost, and well, we all know what happened to the Knicks.”

and that sums up what "bro's" need to know to survive in the world of "hoe's" !!
READ MORE

The Bro Code by barney stinson is an amazing book and all the articles are really good to follow among our bros.
But there are some vulgar codes in the book which makes it unsuitable for people under 16 years of age
READ MORE

Wouldve have been better if it was hardcover..it wouldve looked closer to the real thing and much more legendary..gonna wait for the hardcover if it ever comes out :)
READ MORE

Quality of Printing and Paper is too low
READ MORE

Expected it to be hard bound book, but in this price it's too much ask for.
It is a good buy though
READ MORE