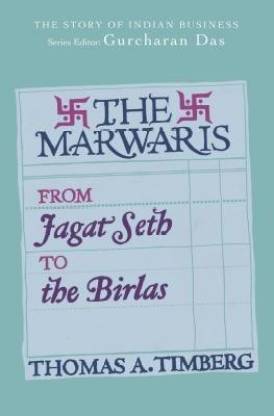 Sold Out
This item is currently out of stock
Author
Timberg Thomas A.
Read More
Highlights
Seller
AmazingBuy
4.6

The Marwaris: From Jagat Seth to the Birlas is a detailed account of the Marwaris and how they have succeeded in business time and again.

The Marwaris evolved from a tiny community from the deserts of Rajasthan in the nineteenth century and spread all across India. By the time of World War One, they controlled most of the country’s inland trade. The community focused on industries next and amassed a conglomerate of industrial resources. By the 70’s, they owned most of India’s industrial assets. Twenty-five percent of the Indians on Forbes’ billionaire lists are Indians. In this book, a leading economist delves into why the Marwaris are so successful in what they do. He studies their capacity for risks and their unshakeable enterprise. He discusses their old system of conserving and growing capital which has helped them throughout their history. Their sense of business ethics has left them the respect of their allies and competitors alike. The story of this community and the leading families may yet help understand the future of India’s economy.

Thomas A. Timberg is an economist and writer.

Gurucharan Das is a writer, editor and management guru. He is the series editor of The Story of Indian Business set of books by Penguin India.

i know more about Marwaris than this book tells the readers.

A damp squib. Indeed. A huge disappointment.As I read in one of its reviews that Timberg has done an extensive research on the subject and Gurcharandas was all encomiums in its forward, I expected this book to be extremely informative full of insightful narrations. The book lost its stream before I trudged across the half way mark. More over it concentrates on merely a couple of MARWARIS leaving other eminent families either totally neglected or unmentioned. Saksarias are one such glaring e...
READ MORE