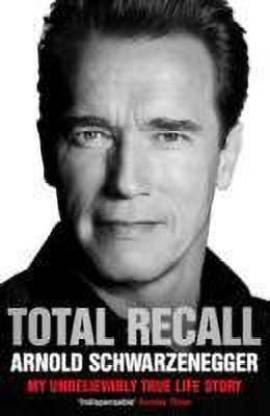 Arnold Schwarzenegger fans can get to know the hunky actor better with this book that gives us details of his incredible life.

Total Recall: My Unbelievably True Life Story tells us the true story of Arnold Schwarzenegger from the day he was born to when he gained success. He was born in the small city of Thal, Austria, in the year 1947. When he was 21 years old, he shifted to Los Angeles. In just ten years, he saw his first signs of great success and was a millionaire businessman. He was considered as the world’s biggest superstar at the age of 22. After acting for many years, and many successful movies later, he became the Governor of California in 2003. He is still seen as one of the most successful actors in the industry.

Arnold Schwarzenegger was Governor of California from 2003 - 2011. Before that, he had a long career starring in such films as the Terminator series, Stay Hungry, Twins, Predator and Junior. His first book Arnold: The Education of a Bodybuilder was a bestseller when published in 1977 and has never been out of print since. The New Modern Encyclopedia of Bodybuilding has sold more than half a million copies in the past decade.

This is a must read book for anyone who wish to chase your Dreams despite of all difficulties Throughout this book you can feel his indomitable spirit to turn his dream into reality.He was so determined and clear on his vision that he moved each and every step of his life towards his Goal without compromising.
He was himself and gave back what all he can for uplifting the Art of Bodybuilding.

For Arnold Fans this would really be a great treat!!!. Just grab this wonderful book. worth reading.
READ MORE

The story of conan who turned into terminator !!!

This is a amazing piece of work as both an inspiring story or a biography.The book contains the truth and complete picture of his life from his birth to present with updated picture gallery.A great book to know how he moved in and out of his thoughts which made him the person he is now ! Thanks to flipkart again for prompt delivery at a great price !!! loved itt !!!!!! 10/10

Today I got this book on my hand and when I opened the packing and then the first look of boook was something amazing. I'm feeling so good after buying it. Book is of 664 pages and its printing quality, page quality is pretty nice. Thanks to flipkart for getting me this book at Rs.336 only.

Without any second thought just go for it.
READ MORE

its a very good one.his narration carries us along and we can feel each one of his emotions and thoughts as he projects them.he never pretends to be anything more than he actually is.he talks about controversies surrounding him.maybe a bit too much of bodybuilding is involved,but hey,he was one of the greatest bodybuilder ever.. nevertheless the book is very inspiring in a way we can relate with easily.we'll feel we can achieve in our field what he has achieved in his.
READ MORE

Well written, and truly inspiring. The best book to get you motivated and inspire you to chase your own dreams. I would recommend this book to all.
READ MORE

Good book, a must read for all Arnold fans, Bodybuilding fans, even management pupils..shows how by mental strength,focus,hard work,multi tasking and hardcore positive thinking a poor boy can become a global hotshot celebrity...delivery by flipkart and ws retail was fantastic...A must read for all ....!!!
READ MORE

Really one of the most motivationa book since ever ..this leads to success
READ MORE

Awosome book for anyone to his fans,aspiring bodybuilders or somebody to get motivation to see what u cn achieve in a single life
He makes us familiar with his life , up nd downs of its, his mindset [most imp.], his thinking nd his rules to success which can make u really serious about your goal
Thats why it is a must read fr anybody on the PLANET
READ MORE