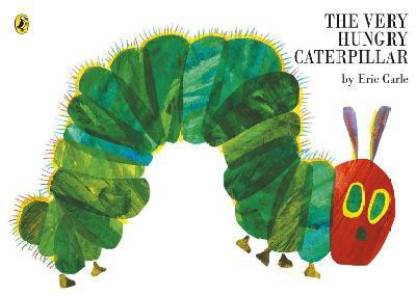 The Very Hungry Caterpillar is a children’s classic that tells the story of a caterpillar as it grows into a beautiful butterfly. It also provides interactive fun to children by teaching them about the days of the week, counting, good nutrition and a lot more through its die-cut pages and attractive pictures.

The Very Hungry Caterpillar is a picture book that features a caterpillar who eats a variety of foods before emerging as a beautiful butterfly. It is the story of a baby caterpillar that has a never-ending appetite for food since his birth. He begins by eating a piece of fruit on the first day and gradually goes up to five pieces a day. He then decides to try out newer foods like Swiss cheese, salami, cherry pie, chocolate cake and so on. Not surprisingly, he soon nauseates himself by overeating. He spins a cocoon around him after recovering and finally emerges out of it as a beautiful butterfly with bright, large and gorgeous multi-coloured wings after two weeks.

The Very Hungry Caterpillar uses the author’s signature style of collage illustrations, pages that have “eaten” holes and simple text that introduces the reader to a butterfly’s life stages and also the concepts of counting, the days of the week and different kinds of food.
This book has been translated into more than 55 languages including French, Chinese, Russian and Swedish, and has sold over 30 million copies the world over. It has won a number of awards such as the Selection du Grand Prix des Treize, American Institute of Graphic Arts Award, and the Nakamori Reader's Prize. In the year 1969, The New York Times listed it as the Ten Best Picture Books of the Year. It was adapted for television by the Illuminated Film Company, UK and Disney, U.S.A. Its film rights sold for £1 million.

Eric Carle is an American writer, designer and illustrator of children’s books.

A few of his famous books are Brown Bear, Brown Bear, What Do You See?, Eric Carle’s Treasury of Classic Stories for Children, The Grouchy Ladybug and 1, 2, 3 to the Zoo.

Carle's stories draw inspiration from nature and his books are not only entertaining but also teach the readers something about the world. While writing, he makes an effort to stimulate a child's intellectual growth.

Eric Carle was born in Syracuse, New York on June 25, 1929. He spent a part of his childhood in Stuttgart, Germany where he studied at the Academy of Fine Arts. He also attended the Academy of Fine Arts, Vienna. In 1952, he moved back to New York and worked for The New York Times as a graphic designer. He also served the U.S. Army for a while and worked for an advertising agency as its art director. Carle won the Laura Ingalls Wilder Award and the Hans Christian Andersen Award for his work in children’s literature. He has a son and daughter and currently divides his time between the Hills of North Carolina and Florida Keys.

I am a teacher... so form the education perspective this book talks about: days of the week, numbers, and the most important the life cycle of a butterfly in the most exciting way possible.
The kids are always excited to re-read the book.

The next most sorted after Eric Carle book is 'Little Cloud' and 'The Tiny Seed'! A must have for your collection!
READ MORE

Not happy with the package. The book was folder and packed. This has caused permanent Marks on the book.
READ MORE

6
1
Permalink
Report Abuse
5
Its a nice book for toddlers with lots of activity options and promises a great time for me and my son. Thanks flipkart for delivering the product earlier than expected. you are living the adage underpromise over deliver, great going
READ MORE

I love buying books for my two year old nephew. This book is a lovely one. With a cute little story, little science, lovely illustrations. Its a board book, so you can give them to toddlers without worrying. Great buy!!
READ MORE

Clearly a good read for toddlers!!

Quite an engaging one . Beautifully illustrated.
READ MORE

kids have great fun, poking fingers through the precisely cut rounds... with bright colours and mega size pictures.. they are really attracted to the book... my daughters' first book and i m happy i chose this book... nice way to learn numbers, days, name of fruits etc.

One of the best book for toddlers

This is an excellent book for toddlers. My 3 year old kid love it.. she started telling numbers and fruit names just like that with this book. informative and fun too.

Flipkart service is awesome! I got it within 2 days of ordering and it is amazingly perfect packing too..
READ MORE

The Very Hungry Caterpillar is an amazing book for toddlers. It comes as board books as well as paperback; but i guess the book-tearing/mishandling fades away by 2.5 (or maybe it depends on how early the kid has been around with books). In that case, a paperback is just good.
It introduces kids to the metamorphic life-cycle of a butterfly, weekdays, fruits and other eateries. The eateries that the caterpillar eats are alien to the Indian context; and that is the only thing that is not fine w...
READ MORE

Appropriate for babies and toddler

The eye catching bright illustrations of the caterpillar and all that it eats to finally transform into a butterfly is appropriate for babies. My four month old, given her limited attention span, was enamored by the vivid colors and the short story helps in making the entire exercise of reading to her pleasurable for me as well. The tactile nature of the book with the little holes in each object that the caterpillar gobbles through to get a stomach ache also helps get the attention of the lit...
READ MORE

Happy to shop with flipkart.Shipping early. Nice book for children to hold and read. thank you. Big books of such kind will delight children. Very handy for children of age 9 months to 3 year
READ MORE