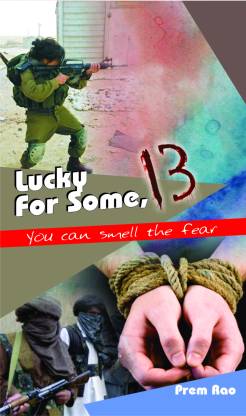 Description
Is the only good terrorist a dead one? When she captures two fanatic fidayeen after their sensational terror strike in Goa in January 2010, little does Major Mohini Nair of India's elite counter terrorism force, the National Security Guard, realize that they would be back to haunt her and the nation later that year.

In September 2010, in another audacious, chilling attack, some of Bangalore's rich and famous are taken hostage in Opulence that last word in luxurious living, in a place and at a time they least expect. Clearly, the best of technology has crashed before base human emotions of greed and fanaticism. Ransom money is not what the mysterious terrorists want. They want the release of their two comrades and safe passage in exchange for the hostages. The blood-curdling brutality of the perpetrators, who include the beautiful Alice Hatchman, petrifies the hostages driving the story to a fever pitch.

Relishing the gruesome to show her power is easy for Alice as she loves no one. Rescuing the hostages is more difficult for Mohini for amongst them is the man she loves. Can the 13th floor penthouse of Opulence prove to be lucky for some?

About the Author
Prem Rao is a thriller writer who turned to his passion for writing after 36 years as a Talent Management specialist and executive coach.

Prem's blogs "People at Work & Play" and "Writing To Be Read" have a global following. An alumnus of The Lawrence School, Lovedale; Loyola College, Chennai and XLRI, Jamshedpur, he lives in Bangalore, India and can be reached at bpremrao@gmail.com.
Read More
Specifications
Ratings & Reviews
4.7
★
13 Ratings &
3 Reviews
4

Lucky for Some 13 - You can smell the fear'' by Prem Rao ( BP / BPR / BP Rao).
Most senior HR professionals after retiring, become Consultants / Coaches or Executive Search specialists and try to leverage their old contacts and their proteges or fade into the sunset.
Prem took a different and less trodden path ,rediscovered his love for writing and started a second career as a thriller writer at 60.. He has just published his second novel within two years of his immensely readable first nov...
READ MORE

Yes, I did smell the fear

I am fond of thrillers and LFS13 was a great read. The writing was crisp, the descriptions vivid and the whole plot highly intriguing. I was spell bound and didn't realize how time flew as I got engrossed in the story. I liked the characters, especially Dhanraj and Jacob. They were very cleverly crafted and added to the story's interest line. The by line said "You Can Smell The Fear" which caught my attention. At the end of it, I must say yes I did smell the fear.
READ MORE

A very racy novel! Lost track of time as I sped through the second half of it! ... Also, I enjoyed reading a book set in Bangalore - It was lovely to read about familiar landmarks - M G Road, Marathahalli, Sankey tank, Devanahalli airport, Whitefield ITPL etc !
READ MORE