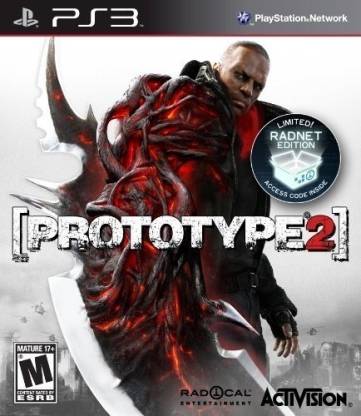 Sergeant James Heller used to be a dedicated soldier and a family man. He lost his Wife and Child and only his sketchy memories of them remain. Heller must get to the bottom of all that is happening around him, in order to get to the powerful people behind it all. The universe of Prototype 2 is filled with destruction, chaos, betrayal and vile deadly creatures. Every new encounter has an ugly secret associated with it. Heller’s job is to uncover them all.

Prototype 2 is a very popular sequel to the famous Prototype game that released a few years ago. The sequel brings with it a new twist in the tale of Heller and his quest in destroying the Evil Alex Mercer. The sequel brings with it an all new story that continues from the older story from the previous game. The PC Version of the game is the normal version with adrenal pumping action and abilities that James Heller can perform on his opponents.

Prototype 2 like its predecessor, is targeted at hardcore gamers with its open world environment and action packed adventures sure to excite gamers of all ages. The Game is available on the PC and has a Mature rating given by the ESRB and an 18+ rating by PEGI.
All hell has broken loose in New York and the one man responsible for it all is Alex Mercer. All of New York has fallen victim to the Viral outbreak and in the process, Heller has lost those dear to him, his wife and child. You play as Sgt. James Heller as you progress through the game and track down Alex Mercer in order to destroy him. Heller no longer cares who comes in the way as he is consumed by hate and sadness at his loss. Being an advanced prototype, he can shape shift in order to turn into devastating weapons of destruction.

The game has been developed by Radical Entertainment and has Activision as its Publisher. Prototype was an epic game with larger than life effects and modules, with Prototype 2, the improvements from its predecessor are even more significant. The game’s single player campaign takes you through the tale of Heller’s life and current situation culminating in him reaching his objective, which is Alex Mercer. Right from the start of the game, you are able to morph into weapons that can level armies, enable you to leap buildings and destroy almost anything. Ingesting characters allows you to steal their memories and knowledge.

You can upgrade your character by ingesting special individuals and mutating into upgraded versions of yourself. Completing a mission makes you stronger and ready for the next one, giving you the ability to disguise yourself better and also in enabling you to take down powerful enemies in a spectacular manner. It is not necessary to follow the linear pattern of story progression in Prototype 2, you can take some time off to accomplish side missions which may include finding black boxes and eliminating Opposing Teams.

Customize Your Killer : Prototype 2 delivers the raw power of character customization back into your hands, allowing players to creatively mix-n-match a devastating range of new Mutation perks into their ultimate Prototype.

Hunt - Kill - Become : Prototype 2 delivers the raw power of character customization back into your hands, allowing players to creatively mix-n-match a devastating range of new Mutation perks into their ultimate Prototype.

Bring Down The Devil: Next year, gamers will experience the epic story of Sgt James Heller attempting to take down the devil himself Alex Mercer. Unraveled against the explosive backdrop of New York Zero and it's vicious factions warring for control over the infection

New York Zero: An All New Open-World Hunting Ground! : The New York that humanity has come to know and love over the years no longer existsit is now New York Zero, or more simply, NYZ

First of all i want to thank flipkart for bringing the game so early I had preodered it when it was for on discount i got the game just a day after it was released...Second the game is just mind blowing i have been playing contineously for 8 hours and i just cant stop playing there is just so much content and so much adventure...In the game you can literally do anything and go nearly anywhere...The radnet addition features about 55 extra missions races and other things that you can play nearl...
READ MORE

prototype 2 is simply one of the best action game i've ever played...
the gameplay, graphics are much improved than prototype 1...
story is awwesome but the coolest thing about the game is the combat, powers and power customisation..

this game is way too beyond if you compare it with others like max payne 3, far cry 3 or crysis 3 etc.
A must play....
READ MORE

As the game's all-new infected protagonist, players will experience Sgt James Heller cutting a bloody swathe through the wastelands of post-viral New York Zero. Equipped with unparalleled new shapeshifting powers,players will gradually build a vast genetic arsenal of deadly new biological weapons and abilities as they hunt, kill and consume their way toward the ultimate goal - to kill...Alex...Mercer!

Are you ready to murder your maker?

THE GAME HAS A AWESOME STORY AND GAMEPLAY.
THE BEST TH...
READ MORE

The game is a lazy sequel as it borrows most of its powers from the first one. The plot has many holes, the graphics suck (and for those who think I am using a low-end PC, no, i use a PS3). Sure the tendrils are good but that is just not enough to make this game likable. The claws power is borrowed from the X-Men Origins:Wolverine which too is published by Activision(now we're talking). The game is like the Spider-Man 3 game where the guy goes on jumping on and off buildings not knowing what ...
READ MORE

Heya gals please buy this game if u like fantasy type games....
We can glide consume hijack etc in this game
this is the best fantasy game ever played.

i feel like thor while playing this game its completely one of the best open games its a must buy for all those who like having powers like hulk !
READ MORE

If survival horror is what you like, then this game won't disappoint you! I own the duo of prototype, and can't get enough of it! Love the weapons, the storyline.

Although - this game is not meant for kids, so be careful not to play infront of a minor! its full of gore (which is what i like and expect from an M game)
READ MORE

Prototype 2 is an amazing game. If you get a chance to buy it....then buy it. It has killer graphics and amazing visual effects. Though i completed it within a day, I will most likely play it for many weeks to come. A top class game and worthy for game of the year. Hats of to Activision and to Rad(i)cal entertainment for making one of the best games i own
READ MORE

First of all thnks flipkart for gr8 service!!!
After playing this game i must say that this game is a blaster action adventure game with cool story line too! you play as sgt. heller who fights to take his revenge with alex mercer (this time antagonist)for the death of his wife nd child... One thing that does let the game down is Heller’s script,with a curse-word almost every time he speaks... If u call urself a true gamer than prototype 2 is for u :)
READ MORE

WROST GAME EVER I PLAYED

according to me. i bought this game i have also a WiFi connection but in this game there is a pre-installation software named steam it is not a agme cd it has only download link of prototype 2 of 10.7 GB. DON'T BUY IT
READ MORE

1
3
Permalink
Report Abuse
+
All 22 reviews
Have doubts regarding this product?
Safe and Secure Payments.Easy returns.100% Authentic products.
You might be interested in