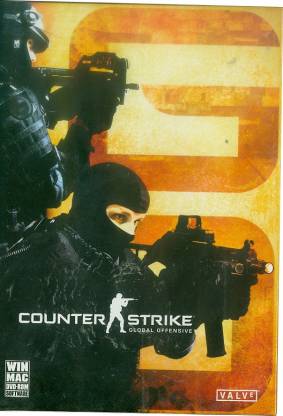 Counter Strike Global Offensive takes off where the previous versions left and makes the combat action more interactive with a number of new additions designed to improve game-play. Global Offensive features the same type of objective based game-play where players must kill all enemy targets or complete the mission objective before the opposing team. Like in previous versions of this popular game, players join either the Terrorists or Counter-Terrorist team when they start out. Buy your weapons and protective armor at the spawning points and rush to take strategic positions that can give you an advantage over the opposing squad.

The Counter-Terrorists are the good guys who have to kill the evil terrorists before they bomb the target or kill hostages. Counter-Terrorists have a specialized list of handguns, rifles, submachine guns, knives, grenades, smoke bombs and flashbangs. Use the knife to run faster when securing a location or use your sniper rifle to snipe down enemy targets from far away. Remember to pick up extra ammunition, kevlar armor and your helmet before you head out into the combat zone. Throw a flashbang to blind your enemies before you charge in and take them out.

The Terrorists also get their pick of weapons with the famed AK-47 assault rifle leading the way. The aim of the terrorists is to bomb targets, kill hostages and attack the Counter-Terrorist team to win the game. Place the bomb at the target and then protect it from being defused by the Counter-Terrorist team. Terrorists also get to choose from handguns, rifles, submachine guns and protective gear.

The game can be played in single-player practice mode or online multi-player mode. Each game features short rounds in which both teams race to kill each other or complete the assigned tasks. Once a player dies he has to wait till the end of the round to respawn in the next round. Win the round to earn more money, which allows you to buy better weapons. Lose a round and earn less money which will leave you vulnerable and exposed with no protective gear.

Counter Strike Global Offensive features familiar rounds such as Bomb Defusal and Hostage Rescue, while new rounds such as the Arms Race and Demolition have been introduced to add more excitement to the game. In Arms Race, each player is rewarded for each kill with a new weapon and the first player to get a kill with every weapon wins the game. The Demolition mode challenges the players by progressively giving them weaker weapons for each kill. In addition to these rounds new weapons like the Molotov cocktail make the combat action exciting as you can now temporarily cover a small area in fire.

Enjoy playing Counter Strike Global Offensive in multi-player mode with your friends and see who is the best with the new weapons. Computer gamers will have to ensure their systems have the minimum configurations which are Windows operating system [7, Vista, XP], Intel Core 2 Duo E6600 or AMD Phenom X3 8750 processor or better, 7.6 GB of available hard disk space and a good graphics card with at least 2 GB of RAM for smooth functioning. This action game can also be played on Mac systems as long as the OS is Mac OS X 10.6.6 or higher, has 2 GB RAM and a good ATI Radeon or NVidia graphics card.

Myths about Installation and Game.

About FlipKart Service:
Very fast, got it within 3days.

About the game installation:
Dont worry as some people say that game is not in Disk at all.
Here are some things I noticed during installation.
1. Inserted the disc. Run the application. It started installing steam client.
2. Second step i activated the game through steam. Remember u need to have a steam id. So create one first.
3. Open steam, click on LIBRARY. Right click on the game name. Click on properties. Click on Delete Local con...
READ MORE

PSA : Do not buy this here

As said above, do not buy it on Flipkart, buy it on Steam instead. The incredible Steam Sales that go on year round will get you this game for a fraction of the amount you're paying here. I just bought the entire CSGO set, including :

For the small amount of 182! That's right folks, 182 INR for all that. Do you really feel like paying 465 for this here anymore? Not to mention the cool fea...
READ MORE

THIS IS HOW THE NEW UPDATE LOOKS- THE PANORAMA UPDATE
the game is truly amazing..no need to describe about it as it's the legendary game. but installing it is quite tough though..1st install it though CD.. then it'll will install the game (older version). then go to steam and update the game..make sure u should have steam account, if not then make account..if game installs directly without asking product code as it has happened with me, then in steam, option will be there as activate product ...
READ MORE

One of the best first person shooter.

One of the best games you will find out there.
I have more than 300 hours of gametime now. And Iam still not bored from it. It's THAT addictive, believe me. The game is offers different modes for both casual and competitive players. Competitive mode for a 5 vs 5 game consisting of 30 rounds, the team which wins 16 rounds win. Teamwork is the key here. For causal players, you have the classic deathmatch and chaotic Arms Race mode. The is also a demolitions mode, but who plays it?
The guns nee...
READ MORE

Okay first of all this game is tasteful delight to every CS player who liked CS: Source, it's like a 10 times improved version of CS: Source. Alright let's start the review!

Amazing Revision to the legendary series

As a beginner or some may say, nOOb, I've always wanted to be a pro. This game, with it's outstanding graphics, improved bot gameplay and easier interface, has helped me improve my game a lot. Realistic recoils, gunshot sounds to real life explosions, it completely lives up to expectations. I play this 6 hours straight everyday, would recommend every FPS lover to buy one
READ MORE

Its one of the most awaited games for the gaming community all over the world and it doesn't disappoint. As a old school 1.6 player this game was something like heaven. The improved graphics is awesome though its a wee bit resource hungry ( which new game is not???) and the high resolution textures make it look really neat. It is playable on intel 2000 series of chipset and the newer ones decently in medium settings and a minimum of 3 gb ram is recommended.
Talking about the gameplaY:
1. TW...
READ MORE

Counter strike,one of the most online played games released the global offensive after 7 years of previous release counter strike source. In seven years the game has improved a lot,including new maps,game-type,etc-etc.
Many of the players have already purchased it by pre ordering it as they can't await for the release.
Every one here talked how to install it and they are correct too as i have taken help of there review to install the game.But no one talked about the game so here are some cris...
READ MORE

Flipkart is Awesome as well as CS:GO =D

This is surely the future of competitive FPS Title for future tournaments internationally as well as in India. :)
Felt somewhat like playing 1.6 but it was a great experience.

+1 for Valve and +1 for Flipkart for the awesome delivery service :)
READ MORE

The game was delivered today and I must tell you, it is much more polished than the beta version. The game is refined and recoil is much better now. Graphics are great and I hear most pro teams are switching to CS:GO. The buy menu is a little different from previous games but can easily get used to it. The price of 699 is a steal and I would definitely recommend this game for this killer price its given for!
READ MORE

4
2
Permalink
Report Abuse
+
All 667 reviews
Questions and Answers
Q:can i download the update in sequence...like 2gb in one day and left update another day???
A:You can do that once you have installed steam. But I don't usually refer it. After the download, just right click on the game (Library > CsGo) then properties and then search for missing files. Done!
Yash Kochar
Certified Buyer
1
0
Report Abuse
Read other answers
Q:If I buy it today,Do i still have to download the 3 or 4 GB of data or will iI get already updated game now?
A:Whenever you buy it you always have to update it.
Anchit Mathew
Certified Buyer
25
5
Report Abuse
Q:can i play in 150kb/s ??
A:if the speed remains constant to 140-150kb/s ,you can play it without any issue
Azhaan Nazir
Certified Buyer
5
0
Report Abuse
Q:Can we play online in this counter strike?
A:yes you can play online by the steam provided servers. all u want to do is click on find the game option and u will be linked to a steam server.
Saurabh Narayankar
Certified Buyer
27
22
Report Abuse
Q:steam would be provided with it or we have to download it?
A:steam would be downloaded and csgo also only you have the key of game in it
Khateer Ali
Certified Buyer
2
0
Report Abuse
Q:Steam Code Is Included Or Not
A:it is included
neetish borkar
Certified Buyer
4
3
Report Abuse
Q:How much internet data it consumes during downloading the game ?
A:after i installed the game using cd provided it only installed a data of 1.7 gb about 4.0gb of data was downloaded using a steam server so i think so it will take about 5 to 6 gb of internet data
Anonymous
Certified Buyer
2
1
Report Abuse
Q:can i play in it in my intel i7 8gb ram 1050TI NVIDIA GTX 4gb laptop? if yes so how can i download and play it?
A:Yes you can play it on high settings obviously and you'll have to make your pc read the disc and enter your key (if given) and add it to your steam library then you can download it from there
Abhinav Sharma
Certified Buyer
1
0
Report Abuse
Q:if i buy one cd ...can i install in two to three PC's with this one cd
A:If you are logged in with the same steam account in all of the PCs you can install it pretty easily in all of them.
Arkadipta Das
Certified Buyer
2
3
Report Abuse
Read other answers
Q:Can i download the game first then buy the cd from flipkart?
A:you can download the game from steam but you have to pay for it.....or you can buy the cd... you cant buy the cd after downloading the game
Sanskar bhargava
Certified Buyer
1
1
Report Abuse
All questions+
Product Description
Counter Strike: Global Offensive is an online tactical and first-person shooter developed by Valve Corporation and Hidden Path Entertainment. It is the fourth instalment in the Counter Strike franchise with updated graphics worthy of the current generation but with the same perfectly balanced gameplay of the original.
Game Mode

As in previous games in the series, Counter Strike: Global Offensive is an objective based multiplayer first-person shooter that features 5 game modes: Classic Casual and Competitive, Arms Race, Demolition and Deathmatch

The gameplay involves the player joining either the Terrorist or Counter-Terrorist team and attempting to complete objectives or eliminate the rival team. Counter Strike: Global Offensive adds weapons and equipment not seen in earlier instalments of the series.

Counter-Strike: Global Offensive received a PEGI rating of 18 due to depictions of violence.

Counter Strike: Global Offensive is available for PC and Mac on an optical disk that can be conveniently inserted into the optical drive.

Other Children Books
Min. 50% Off
Shop Now
Back to top