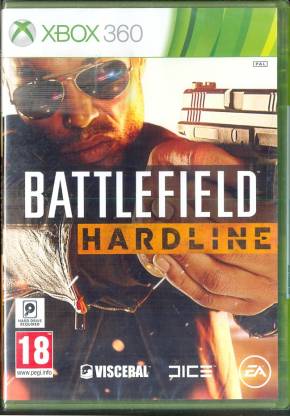 When crime offers you an easier means of making money, would you corrupt your life as an officer of the law and tread a path of evil? Rated 18 by PEGI, developed by Visceral Games and EA Digital Illusions CE and published by Electronic Arts, Battlefield Hardline is a single-player/multiplayer first-person shooter/tactical shooter video game for the Xbox One console. This game utilizes the Frostbite 3 game engine.

The two primary factions in this game are the Special Response Units of the police and the criminals. This game features a variety of military-grade vehicles and weapons as well as police equipment. Battlefield Hardline offers four different modes, they are the following: Blood Money, Heist, Rescue and Hotwire Mode. So, prepare yourself for an action-packed gaming experience unlike any other.

This game breaks away from the military plot-layout as in previous titles and emphasizes on the police and the war on crime. The storyline of Battlefield Hardline follows a SWAT officer named Nick Mendoza who strays the path of righteousness and starts performing criminal activities. The player can complete his or her missions in many different ways; you can choose to accomplish objectives violently or silently. The Police Scanner, a new gadget, allows you to track down enemies, important evidence and objects; you can also mark them all. In contrast to Battlefield 4, the previous installment, Battlefield Hardline offers a lengthier single-player campaign with a much more immersive story. Furthermore, Battlefield Hardline utilizes the Levolution mechanic that was seen in Battlefield 4.

Anyone who is having PS4 shud hv this game as the best graphics u will get will be on ps4 ... Though the campaign of this game is short ....and contains only 10 episodes!!!!!
i think that DICE and VISCERAL have focused more on the multiplayer cause the multiplayer of this game is great and have many great guns too..... the best part of the game that i would consider is that in multiplayer we can ride a helicopter,car and bikes too .. which is not available in other games like COD etc. Thought...
READ MORE

The game is like serials. Not good, for the prize I paid. Completed the game within a day. The online multiplayer is not so good either. You need to pay for most of the modes. Not good. Unless you are ready to pay more.
READ MORE

Hardcore BF fans may not like this game as it is a departure from traditional BF roots.
The focus is on gunplay and competitive modes.It is more frantic and more concentrated. Instead of large scale battles you have microdestruction and tactical gameplay .
It is not the battlefield i was expecting but still a solid multiplayer offering.
single player is great tho .
Consider this a "improved" Call Of Duty . BO3 is going to suck ... its Advanced Warfare 2 actually
READ MORE

Amazing game, gameplay story is great, cool graphics.
The downfall is the short campaign, like i finished the campaign only in 3 days. But overall great buy
READ MORE

Wonderful blend of detective strategies with mission combat tactics. Nicely driven in 10 episodes of each and every different from one another, fabulous graphics. Great work on cinematic view
READ MORE

One of the best singleplayer story fps. Graphics n gameplay totally amazing n smooth on the ps4... it does take to aroun 10 minutes for the full game to install though... it happens right after you finish playing the prologue.. overall really worth it. I hope there is a battlefield hardline 2 in the future..
READ MORE

Battlefield 2, 3 ,4 are superb games, i am talking about multiplayer. i don't buy game to play 7-8 hrs single player mode. Battlefield Hardline is okay. Graphics aren't like previous installments and it doesn't feel like Battlefield.
READ MORE