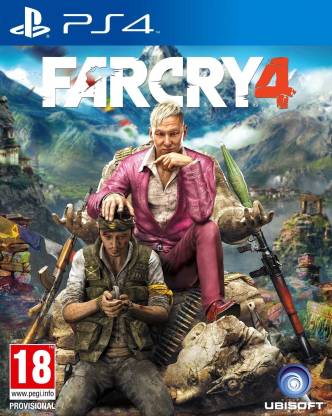 When you have an important responsibility to fulfill and are caught in the midst of a horrid war, how would you go about performing the task while staying alive as well? A single-player/multiplayer action-adventure first-person shooter video game for the PC, Far Cry 4 has been developed by Ubisoft Montreal and published by Ubisoft.

Rated 18 by PEGI, Far Cry 4 is the latest installment in the Far Cry game series and is set in the fictional and wild nation called Kyrat which is located in the Himalayas; the region is governed by a self-appointed tyrannical king. Unexpectedly tangled in a civil war against the king, Ajay Ghale, the protagonist, has to fulfill his mother’s dying wish and confront the despotic king who is wreaking havoc all across the land.

The gameplay of Far Cry 4 is similar to that of Far Cry 3, however this game emphasizes on the act of hunting local animals. Loads of new weapons and vehicles can be used through the span of this game. Far Cry 4 also ups the gameplay in contrast to Far Cry 3 by offering rideable elephants. The standard edition includes a series of three high-octane single-player missions coined Hurk’s Redemption which features Hurk, the NPC character from Far Cry 3’s downloadable content. “The Impaler”, Hurk’s signature harpoon gun, is included in the standard edition as well.

Are You a INDIAN Gamer then Must try this.

Man,the game was freken awesome.I bought it from a Dealer ;D
But this is the first game which based on India(himalayas)
HIndi is used a main Fonts like for loading it says "EK MINUTE"
And also NAMASTEY and much more
30types of animals to hunt and one bonus of Yeti.
Game look like alive,i bet u that you will take a long time to explore that world in this game.
Graphics=4.8/5
story=4.5/5

As someone new to the series, this is a great game to start with. It is just great in all aspects from the point of view of a casual gamer. Beware, this game can get repetitive. But the different environments in almost all missions in the game, and the open world, make for a game that suits all kinds of play styles.
READ MORE

One of the best open world games!
Great villain, great moves, great story!
Better vehicles than in Far Cry 3. Many say 4 is the copy of 3 but its not. 4 is way better than 3, so i suggest every hardcore gamer to play this once in their life ;)
READ MORE

A Classic Game for FPS lovers!

Now, I have played the FarCry series from FarCry 2 to FarCry 4 and oh boy! Should I say that 4 was the best.

First of all, the delivery was superb by Flipkart and the packaging was great too. Cheers for the seller and Flipkart.

Now about the game. FarCry 4 puts us into the region of Himalayas near India with a beautiful landscape besides, the names are quite Indian too. Also there's written 'Ek Minute' in the loading screen. Besides all these, the eye poppi...
READ MORE

BEST FARCRY EVER - BEST FPS OF 2014 - BEST TASTE OF HIMALAYAS

ITS THE BEST FARCRY EVER , WITH A STORY SET ON A FOOT OF HIMALAYAS , THE ENVIRONMENT , PEOPLES , SURROUNDINGS ARE PURE .. HINDI SONGS , THE GAME CHARACTERS INDIAN LIKE ENGLISH PRONUNCIATION , HIMALAYANS WEATHER - ITS ALL PERFECT , AND EYE CATCHER FOR ANY INDIAN GAMER
BUT....... THERE IS A BUT , AND THAT S WHY I M GIVING IT 4 OUT OF 5 , SOMETIMES 3.5 OUTOF 5, THE GAME OUT OF THE BOX , IS NOT WELL OPTIMISE , AND THAT MEANS IS , IF YOU HAVE A GOOD AR A BEAST GRAPHICS CARD THEN YOU WILL NOT A...
READ MORE

FARCRY4 has the best gaming intro I have seen in a while. It was worth spending Rs. 3499/- just for the first 10 minutes of gameplay! Well done Ubisoft! 5 stars!! :D :D
READ MORE

I was so excited about this game and the price is also very reasonable for this.But when i finished installing this game it says me to download a patch that is 3.6GB SIZE....!!!..This is a major negative point that i dont like.So if you want to play this game then make sure that you internet is more than 1mbps.I was pretty much satisfied with flipkart delivery also.It had delivered before the assumed date only.Flipkart is one of the shopping site that we can trust upon....
READ MORE

Disappoint On Flipkart. But Game Is Awesome

This I Not New That Flipkart Fail To Deliver And Even Release The Game On Original Releasing Date. The Same Thing Is Happen With Grand Theft Auto 5. Which Shipped On 18-Sept-2013 Where Original Releasing Date Is 17-Sept-2013. And Got The Product 3 Days Later. Thank GOD! This Time I Buy The Game From Steam And Download Via My Broadband Take Three Hours For Size Of 28.8 GB Which OK. Leave That Flipkart Topic Aside And Jump On Game. I Have The Far Cry 4 Gold Edition And I Just Amazed They Put Lo...
READ MORE

I'm so glad i bought this game. It has great missions and main story. The graphics are amazing and the gameplay experience was totally amazing! You can feel the rush when a rhino is rushing towards you, knocking down vehicles around you! And the hindi slangs are just a cherry on the top!

Ps: Kudos to flipkart for the swift delivery!
READ MORE 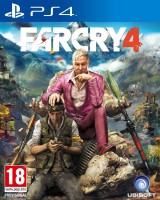 Get ready for an adventure-packed experience with the Far Cry 4. The game is set in a country that's home to leopards, rhinos, black eagles, and vicious honey badgers. Ride on the elephants, drive the vehicles, hoard weapons and all that you need to survive the war.

Far Cry 4 has a rating of 18 by PEGI and is set in a country hidden in the Himalayas.

Far Cry 4 has been developed by Ubisoft Montreal and published by Ubisoft. This game is meant for your PS4 consoles.