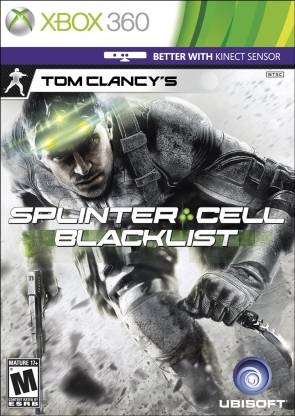 Fans of Splinter Cell are eagerly waiting to reprise the role of Sam Fisher, a secret operative that reports only to the President of the United States of America. Even though the United States has military presence all around the world, some missions just cannot be carried out by the book. That is when Sam Fisher and his newly formed Fourth Echelon unit come into play. This clandestine team of operatives must avert disaster and help guide Fisher through the missions with vital information.

This version of the Tom Clancy's Splinter Cell Blacklist is developed for the personal computer running Microsoft Windows operating system by Ubisoft Toronto and published by Ubisoft. The LEAD engine or Unreal Engine 2.5 as it is unofficially known is used as the platform to run the game. Blacklist can be played in single-player, multiplayer and co-op modes allowing you different gameplay options. This action adventure game involves you using your stealth skills to takeout enemy units without drawing attention to yourself.

After the events of the last game in the series, President Caldwell officially terminates the corrupt Third Echelon and all its operations around the world. The newly-formed Fourth Echelon is led by Sam Fisher and comprises of elite operatives brought together from different agencies. Their objective is to operate in a mobile environment and travel the world executing clandestine missions authorized the President. A group of rogue countries initiate a terror ultimatum called Blacklist against the U.S of A. The countdown will trigger a deadly series of terrorist attacks on U.S interests and cause mass destruction of both life and property. The President orders Sam and his elite team of operatives to hunt down the terrorists by any means necessary and prevent the Blacklist countdown from reaching zero.

Get on the mission with Sam in his tactical suit and goggles to hunt down the members of the Blacklist and use ruthless interrogation methods to extract vital information from captured enemies. Acting above the law and with very little time, Sam has to figure out the clues with the help of his elite tactical team which includes Anna Grim Grimsdottir as technical operations manager, Charlie Cole as the resident hacker and CIA operative Issac Briggs, who brings his expertise with weapons to the table. Travel between exotic locations and US cities to find out who is behind the Blacklist countdown. The Paladin is a re-purposed stealth airliner that allows Sam and his team to be a fully mobile unit. With unlimited resources and cutting edge technology, the Fourth Echelon is the last line of defense against unknown enemies.

The Strategic Mission Interface (SMI) keeps Sam and his team informed of terrorist attacks in real time and keeps them updated while they are on the move. Use the SMI to access the money you earn by completing missions and objectives to upgrade your weapons and gear. The new Kill in Motion feature lets Sam strike lethal blows with precision by marking and executing enemy units in a single fluid motion. Use new and upgraded gadgets to get vital information about enemy whereabouts and plan your action accordingly. Use the upgraded snake cam and micro tri-rotor drone to scout ahead in order to mark enemy agents to execute. Use the curved and brutal Karambit knife to kill enemy units in close quarter encounters. The game is yet to be released and the rating is also pending.

Ok 1st of all The game is just awesome and thats why i bought it ... Second and most important all the gamers must be wondering about steam support ... The cd does not come with steam support(key) but only with Uplay Support which is ubisofts own gaming hub engine or whatever you call it and every key is for UPlay only and not steam ... even the dlc keys which flipkart emailed you and has instructions of it to activate them on steam but it does not work with steam but only Uplay and that too ...
READ MORE

Pros -
Epic Storyline, I mean EPIC!
Awesome gameplay - 3 ways to play -
Ghost = Remain undetected and be non-lethal.
Panther = Kill everyone using lethal attacks but don't be detected.
Assault = Go in all guns blazing and it doesn't matter wether you are detected or not.
Oh yeah, remember to KILL everyone.
And so much more

Cons -
Graphics is not a delight but is acceptable
A few glitches here and there but get over it, nothing is p...
READ MORE

Hii guys
I bought this game on 28 Feb for just â?¹198 (Deal Of The Day)and as always flipkat delivery was fast and easy. Now coming to the game. I am a big fan of tom Clancy games. I have played almost soo many Tom Clancy title especially the splinter cell series. The gameplay has been improved totally. This game has got a 9/10 by the critic. Cutting edge technology has been used in the game. I have a very basic laptop with just 2 GB RAM and a 2nd gen i3 processor and the GPU is integrated I...
READ MORE

Always been a big fan of the Splinter Cell Series, Being played all the previous series i felt this one was really not up to the mark...

- The story again starts with the same old thing with America under threat from the terrorists[Blacklist] and this time its Fourth Echelon not Third Echelon[SC-Conviction].
-Game play pretty much the same nothing new except 1 or 2 additional gadgets and the additional missions where you can plays with a teammate[online]
-Missions where not that challenging ...
READ MORE

Best pc game that every gamer must have, great story and best game play with extreme graphics, it is also budjet game of 499 rupees only. Though all over a must play game...
READ MORE

It's a awesome experience..best of tom clancy's series...one of the best stealth game i ever played..graphics is excellent...and the gameplay is awesome..3rd person gaming makes it easier to play..though a little late for playing this game but it's surely one of the best i have played until now....
READ MORE

I am Hardcore gamer and i was a great fan of tom clancy splinter cell series
In blacklist the ubisoft indroduce a new way of stealth gaming,Very obviously an olive branch to hardcore series fans like me who were left dismayed by the franchise’s action-heavy pivot in 2010’s Conviction, Blacklist gets stealth right. (In Conviction, scenarios like the one described above don’t happen and features include built in a win button called Mark and Execute that kills up to four enemies instantly with n...
READ MORE

This game could have been 10 time better if it was on Steam. You will hardly find any player on Uplay. Co-op is the best part of the game and the worst thing is you will not find any players online in Uplay. Total waste. Other wise nice game.
READ MORE

Best Game I Bought This Year (Till Date)

Its the best Game i bought this year till date. Good Story Mode. The story was at the right pace. Multiplayer was awesome. Playing it daily. Ubisoft keeps releasing patches often to clear bugs and introduce minor features. One thing i was annoyed was Spawn Kill. People use to place proximity mines where people would spawn. But they fixed it in a latest patch. Now its my turn BANG!! You have to use different strategies in multiplayer to keep yourself ahead of others.
I love to be spy in SVM m...
READ MORE

First of all, I'd like to make a small clarification regarding the Pre-order bonus codes. If you pre-ordered the game, you would have got an email from fliplkart in which they sent you the codes along with instructions to redeem those codes. It says in the mail that you have to enter the codes in STEAM, but actually the game is run thorugh UPLAY. So after installing the game, launch the game through UPLAY and you will find an option in the menu called "extras". Here, you can redeem those bonu...
READ MORE

1
1
Permalink
Report Abuse
+
All 150 reviews
Questions and Answers
Q:can we play this games offline?
A:Yes works fine. Just enable Uplay to run offline.
Avinesh Benjamin
Certified Buyer
2
0
Report Abuse
Didn't get the right answer you were looking for
Safe and Secure Payments.Easy returns.100% Authentic products.
You might be interested in