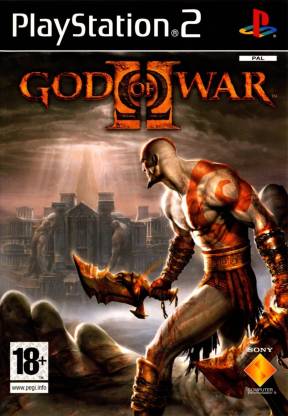 God of War II is the critically acclaimed sequel to the God of War video game and the second installment in the series. Gamers who enjoy hack and slash games where the objective is to destroy all who oppose them, will love this game. This exciting game is based on Greek Mythology and is set in Ancient Greece. The gameplay for this game is similar to God of War which focused on combo-based combat movements to attack your enemies.

God of War II is a single player action-adventure game that is played from a third person fixed camera point of view. The game also includes elements of fantasy, mystery and thriller making it a game that keeps surprising you. This game was developed exclusively for the PlayStation 2 by Santa Monica Studio and published by Sony Computer Entertainment. This game has a Pegi rating of 18, while ESRB has rated it M 17+ as it may contain intense violence, blood and gore, sexual content and use of strong language.

Kratos, a powerful Spartan warrior and the new God of War, earned the title after defeating Ares, the original Greek God of War. Zeus, the King of the Mount Olympus, betrays Kratos by draining his godly powers and killing him. As Kratos is slowly dragged to hell, he is rescued by the Titan Gaia, who helps him escape his hell. She informs him that if he can find the Sisters of Fate, he can travel back in time and avenge his betrayal by taking revenge on Zeus. She also reveals to him that Zeus betrayed the Titans and took his father’s place as revenge for the cruelty inflicted by his father on his siblings. He also finds out that Gaia and other Titans like her, want revenge on Zeus to avenge the loss in the Great War.

Thus set on a path of destruction, Kratos has to travel to different places like the Underworld, the Lair of Typhon, the ancient City of Rhodes, the Island of Creation, Tartarus and Mount Olympus. Vanquishing enemies with the fabled Blades of Athena, Kratos makes his way through many a foe and as the game progresses he finds other weapons like the Barbarian Hammer, the Spear of Destiny and the Blade of Olympus. As Kratos, you will have to solve puzzles, climb walls, swing on ropes and balance across beams to proceed. Athena’s Blades are attached to chains that are wrapped around Kratos’ hands. Kratos also has to find other relics like the Golden Fleece and Icarus’ Wings to proceed in the game. Kratos also gets a special ability known as the Rage of the Titans which makes him temporarily invulnerable.

It is not an easy game for anyone to play. If you are new to GOW series, I would suggest you to play GOW1 to familiarize on the controls and tactics. This is the best bloodthirsty game of a Greek Warrior. You surely feel your adrenaline pumping up. I love it...Juz Ausum!
READ MORE

I had bought dis product from Avani shoping mall, wid my Ps 2. In my view thw best of ps2 is dis. awsm graphics wid superb game playing. but unfortunately, the dvd is not working after a specific part. I dun knw the reson. bt i m going to buy dis from flipkart soon..
READ MORE

I would say everybody to buy and enjoy this game as it has very amazing gameplay and also filled with action and puzzles which you would need a bit time to solve. Surely one of the best games ever. Kratos is my all time favorite character in games i have played. Enjoyed the game finally after buying my own PS2 (not from Flipkart) as the PS2 production has already stopped in February 2013 onwards and i say i have not regretted my decision to go with Ps2 instead of PS3.
READ MORE

no words to say

although i have not purchased this game through Flipkart. But i have played and completed this most lovable game of mine..

its not just a game its an epic. you will love the locations, graphics and the logics used by the programmers to go ahead. Kratos is just superbbbbb no words to describe his cruality, arrogance and attitude.... well i am feeling like him after completing the game lol :)

God of war is one of the finest games of the world i like this very much.This game is addiction.We don't want to leave this game.We think That Game does not ends.God of war is an excellent game and god of war 2 is more than excellent. Kratos is the most dangerous warrior ever. He being a mortal could defeat gods. In the first part he defeated Ares and in the second part he is after Zeus....What a game by Sony. Excellent game, Marvelous creation. Once I start this game...it becomes impossible ...
READ MORE

The game is simply birlliant.
It improves over the first title with better graphics, game play and story line.
The cinematography is splendid as well.
The addition of many new gameplay elements and the reworking of the game mechanics from the previous game make this a brilliantly constructed experience.
A must buy for any ps2 owner.
READ MORE

When you finish God of War 1 and have helped Kratos defeat Ares, the God of war and take his throne, you will wonder what GOW2 will be all about. Well, now you will take on Zeus himself in this epic journey through temples and titans.

A must play game.

Ps: If you have not played God of War, then I suggest you play that first. The shear magnitude of the game will take your breath away. More important, you will understand the sequence better.
READ MORE

Finished it off playing. The new weapons are more interesting and better suited...keeps your fingers proactive on the controller

All in all good game and the legend continues to the beginning of tHE enD.

Excellent product , earlier i brought the duplicate DVD , it used to hang at certain points , and i couldn't proceed after that , and as you all know its such a addictive game , i decided to buy to the original to finish the game , its worth to buy this original DVD . All the best FLIPKART ..
READ MORE

God of war is an excellent game and god of war 2 is more than excellent. Kratos is the most dangerous warrior ever. He being a mortal could defeat gods. In the first part he defeated Ares and in the second part he is after Zeus....What a game by Sony. Excellent game, Marvelous creation. Once I start this game...it becomes impossible for me to stop it. Cool game. Thumbs up!!!
READ MORE

0
0
Permalink
Report Abuse
+
All 28 reviews
Have doubts regarding this product?
Safe and Secure Payments.Easy returns.100% Authentic products.
You might be interested in