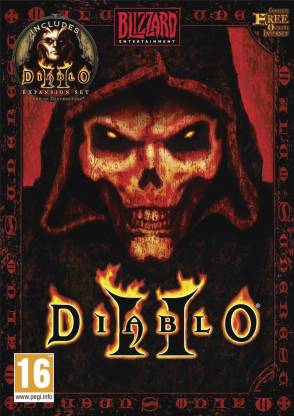 A dark force lurks in the forests of Sanctuary. Plenty of tales and fables about this dark force have been heard, but none are confirmed. However, the destruction caused by the force has been witnessed by all. Demons entering from different portals, unjustified and merciless killings are spelling doom for Sanctuary. To stop this force you have to take down the evil surrounding it. Only in the world of Diablo II, nothing is as easy as it looks. Trying to find the real truth behind all these catastrophes, you have to travel deep into the world of Sanctuary and put an end to the madness.

This edition of the game is a Gold Edition and includes the expansion pack named Diablo 2: Lord Of Destruction. The expansion pack adds new content, 2 new character classes, new weapons and a brand new act to the original game. The sequel to Diablo, Diablo II improves on its predecessor in many aspects.

The game is targeted towards hard-core and casual gamers who like fantasy based games. The action role-playing game has interesting features that are sure to get you addicted to the game. Diablo II game DVD is available for PC and carries a Mature rating from ESRB.

The 4 acts spread across the game will take on an incredible journey across Sanctuary as you try to find a path that leads to the Dark Wanderer. By rescuing key characters, you will be able to travel through deserts, open various portals to finally reach the evil overlord and assassinate him. Diablo II’s story moves at a very slow pace, but once you are past the first act things move pretty fast. You have to be a smart and quick thinker as only advance strategies will help you in taking down the Dark Wanderer.

Developed by Blizzard North and published by Blizzard Entertainment, Diablo II spins a tragic tale of how even good deeds can turn a person into an evil self. The hardware specifications required to play the game smoothly on your computer are Windows 2000, a 1.3 GHz Pentium 4 or AMD Athlon equivalent processor, an NVidia GeForce FX 5500 or Radeon Xpress 1200 series graphics card, 256 MB RAM and 1 GB of free hard disk space.

The single-player campaign will introduce you to 5 different character classes. You can start playing the game by selecting any class, but be careful as each class has its own unique powers. A new character system has been implemented in Diablo II, allowing you to choose and customize your character within the game as you deem fit. Spread across 4 acts, the game has a different setting for each act. This is an interesting feature as you won’t feel like you are playing the same level in every act.

You can gain large amounts of treasure and experience by slaying monsters. Unlike other games, the killing is justified here as if you don’t stop the Lord of Terror everything will be lost in the world of Sanctuary. Using experience points you will be upgraded to more powerful weapons and abilities. This will help you to finish off the demons much faster and reach the Dark Wanderer sooner, rather than later.

The multiplayer component of the game is just like the single player mode with the same levels and maps. Diablo 2 is fun to play with other gamers as you can easily connect to them using LAN or by logging into Battle.net. There are 2 ways to play the game online: open realms and closed realms. Single-player characters are playable through open realms, while the closed realm characters are stored on the blizzard servers. Players can also play the game cooperatively by using PvE or PvP methods.

Several patches are available for the game that tweak many features and help in improving the overall gaming experience. The various bug fixes help improve the gameplay, allowing you to easily log in online and play the game with your friends. The patches, updates, wallpapers and other content for the game can be downloaded directly from the company’s website.

Now that Diablo III is out i was guessing Diablo II would be discounted. But its still in Ks. Anyways....coming to the game review, it is way better than Diablo I and has better control simulations around corners. The demons are tougher and inclusion of Egyptian demons make it more catchy. The transition from portal from one scenario to another is seamless this time.
READ MORE

3
2
Permalink
Report Abuse
Have doubts regarding this product?
Safe and Secure Payments.Easy returns.100% Authentic products.
You might be interested in